I am definately lumping on 4-2 when Matt & Dj start together.

I am definately lumping on 4-2 when Matt & Dj start together.

What makes a bid “cheeky”? Does it involve raspberries blown down the phone or pictures of bare buttocks attached to an email?

My memory is foggy but I think a club did that where they agreed with the other club not to play the player in their fixture and both clubs got investigated if I remember rightly. I’m pretty sure if it’s a permanent transfer no clauses can be inserted like that for various reasons.

What makes a bid “cheeky”?

Throw in a Nandos to clinch the deal?

What makes a bid “cheeky”?

Is it if you end up getting a bum deal?

If it was a permanent transfer, they could potentially include a clause that said he couldn’t play against them.

I would argue this would break rule 124.1 of the EFL regulations… Dictating that your top scorer is not available for selection for arguably the biggest games of your season would be materially influencing the team’s performance.

124.1 No Club shall enter into a contract which enables any other party to that contract to acquire the ability materially to influence its policies or the performance of its teams in League Matches or matches in any other recognised competition.
Source: EFL Official Website - Section 12 - Additional Provisions

Have to feel for DJ missing this weekends game

Disgraceful, I’d down tools at Mansfield.

After exhaustive but fruitless efforts to sell DJ elsewhere. Mansfield will accept Walsall offer about 10 minutes before the window shuts 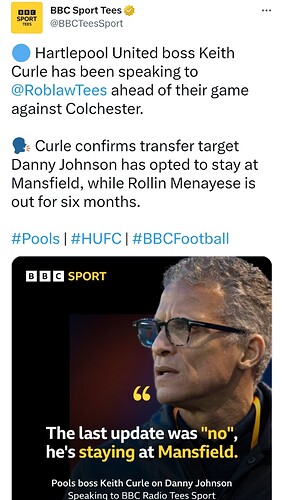 That can change still think we can get it done

Whatever happens with Johnson, if I were Walsall I would steer well clear of doing any transfer business with them in future. If they contact us about signing one of our squad just put the phone down or delete the email.

Plenty of other clubs to do business with.

I hope they piss about that much that they end up getting Jack shit for him in the end.

He will stay at Mansfield , play 2/3 times max for them then very probably , if we are still in Div 4 , come to us in the summer .

Not just Walsall but any other club looking on.

If true that DJ has said he wants to be here, if Mansfield have pulled back from the original deal (there right too btw) and then rejected a fee from us which matched that placed and agreed to from teams lower in the league as they don’t want to sell to a rival and then upped the amount required, yet never said that they are unwilling to sell. Then refusing to release him for one of the bigger games of his career.
I would say a new player looking to sign for Mansfield would think twice before signing. Does the Mansfield chairman realise the damage he could be doing to his own club

Agreed, the Mansfield owner is on the verge of making a right mess of this. Not over yet though.