When are they out? Need to plan all the away days I won’t be able to go to

Really hoping for likes of Carlisle and Crawley away to be early on (aways I have no interest in going to). Even a local one like Vale I’ve done a few times so not fussed if that’s in October or November

Harrogate, Mansfield, Newport all to be in 2021 please just in case.

The fixtures will be released on Friday August 21at 9:000am
Draw for round 1 of the Carabao Cup is on 18th August with the first game on 7th September
EFL trophy 1st round will be played w/c 7th September

I think Dan Mole said we have 6 friendlies arranged 1 of them at the Bescot.

One thing I think will be important is the whole squad is a little stronger this year rather than the first 11. 3 matches in the first week alone, there will need to be rotation. That should play right into Clarke’s hands with the amount he likes to fiddle around. Sometimes too much for my liking but it’s going to be necessary this term.

Also one of the reasons I’m not fussed about friendlies. I’d rather they play a few training games or behind closed doors and go into the season with a full complement of players available rather than injuries. We’ve picked up very costly knocks before and it’s going to be extra important this year to keep everyone fit.

During our losing streak last season, we never had our so called ‘better’ players all fit at one time.

And when they were all fit, we were winning games.

Coincidence? I think not.

Just looking at premier league fixture lay out and think there’s 18 league games scheduled from Jan 30th to end of the season, three or four midweek rounds so you can double that for other leagues.

Looks like they’ll gamble that things will be better by February so will cram in nearly half of the season from that point with pretty much a game every midweek.

No replays in the FA cup either from round 3. Would be typical if this is the season Walsall get a plum away tie to premier league club in either FA or league cup.

So the season is actually starting a week earlier than we thought, with still a question mark about whether when we’ll be allowed in - “from October” being dangled on the proviso that everything went according plan just days when things apparently went off the rails a bit, so more or less certain that we will be starting behind closed doors.

For the EFL Trophy games involving kids teams from our “betters” in the EPL and Championship, it won’t make much of a difference as hardly anybody goes to them to start with (at least not the group stage - and especially away games), and much the same for the 1st round of the League Cup unless it’s a meaningful opponent - and thus it can sometimes cost more to put these games on than you get back in gate money. The first Saturday home and away league games usually attract a bigger attendance than average from both clubs though, so would be missed.

From that point of view, away in both cup competitions to minnows that are miles away would mean less Walsall fans missing out that would otherwise have attended - and a League opening day home game against similar who wouldn’t have brought many to our place anyway would lose us less takings.

On the other hand … for those that do want to watch (even if not in person at the game) the only option will be iFollow - except that not every EFL club is part of it (there’s a list of nearly 20 of them on their web page). As we are, do the home club have to pipe it through regardless or would we have to fork out for whatever provider they do use on top of iFollow charges?

It is streamed on iFollow through WFC so u don’t pay more even if other team don’t use it.

Premier league ones this morning have teams playing 9 home matches from February 2nd. I imagine for football league clubs that will be 11 or 12 home games so hopefully by February we’ll be back to normal and anyone can watch the second part of the season safely.

Which home and, particularly, away fixtures are we hoping are the behind closed doors ones then?

Definitely hoping Colchester away is early on. A massive slog of a journey to an indetikit template stadium is one I’m sure most won’t be too fussed that they’re not permitted to go to.

Fixtures are already on the official site. We start at home v Grimby with earlyish trips to Barrow and Harrogate.

EDIT: ODD! they’ve disappeared. I didn’t understand btw why Harrogate away game was scheduled for the Keepmoat Stadium.

They’re not allowed to publish them until 9:00am.
Harrowgate are playing at the keepmoat while they dig up their 3G pitch and replace it with grass.

Here they are from the OS: 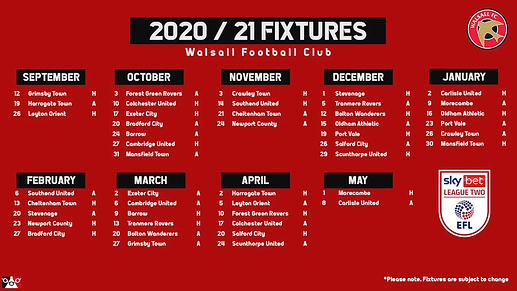 Carlisle away fro the last game of the season. That will be a long trip for the promotion party (if we’re allowed in by then!)
With Harrogate playing at Doncaster for the first part of the season and Barrow away in October that 2 new grounds we won’t be allowed in.

Three of the first four away games (Harrogate, Bradford and Barrow) all ones fairly handy for me… guessing we won’t be allowed to any of those.

All ones I had been hoping would be at the back end of the season too so bit disappointed. Perhaps Bolton and Grimsby at the end of March assuming away fans are allowed by then and I have my doubts.

Nice to see we have a local derby for our New Year holiday game - Carlisle!