I agree much better hes definitely been on uts in the last couple of days.

With MT and the 5 before him, there didnt feel like a project was building. With MF i feel theres a plan in place and im willing to give him a season to see what happens

What differences do you see that make you think that?

The results dont show it, but i think the level of player bought in is a step up from what we had. We’ve invested in a better coaching set up and when the team get going theyre good to watch. Also, were not getting pumped. Its quick concession of goals which means that its mentality rather than quality. Finally, the main reason were loosing is becuase of bad halfs or periods not full games and not finishing our chances.

Yes its looking hard at green shoots, but what else can i do?

Yes its looking hard at green shoots, but what else can i do?

Shout for the manager to be sacked, because it has worked every other time

There was a point last season when we had Wilkinson , Miller and Phillips all in the squad.

Phillips has gone on to do ok so has Miller, we have fewer options now.

Has Miller gone on to do ok? Doncaster are on a wretched run of form with him and Tomlin in the side.

Played 9 scored 3 assisted 1. So better than anything we have outside Johnson.

Doncaster are on a wretched run of form

They’d gone 4 games without a win prior to winning away at L1 Lincoln last night.

I think the quality of this squad is broadly similar to that of last season, and the last few seasons - hence the league position and the cup exits. What is also similar is the fact that our top scorer is a loan player, without whom we’d be almost incapable of scoring. The other similarity is there is no clear tactical plan to get the best out of what we have, nor one which leads to a logical understanding of our vast summer turnover of players.

I do think we have some better players, We have yet to see Gordon and Riley properly but they were both signed as first-team players. Knowles, Bennett and Maddox are better than anyone we have had for the last two years. And Allen, Williams and Clarke are no worse. 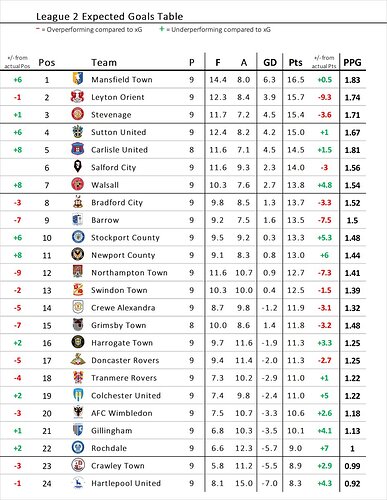 If only we were more clinical infront of goal, i think we’ll get there eventually.

Oof. You know it’s getting desperate when we are rolling out the XG.

I don’t see that at all. The punts on endless young strikers is just the same as under previous managers in last few seasons, still no midfield signed of calibre of Joe Edwards who can actually chip in with 5 or more goals unless Riley can do it.

Said a few months back I’d have loved Ollie Banks as midfield signing. 9 goals in 39 games at league 2 level so that’s the calibre I was expecting for a serious promotion bid.

He now plays for Chesterfield so that sums up where the club is these days in the pecking order.

Daniels came in just before Flynn got the job so Clarke is only experienced CB and in last few weeks seen the weakness of signing an outfield player who is 40.

Hopefully Gordon can stay fit and we’ll have 10 straight games of him and Bennett starting as wing backs before world cup break and see if that can improve the attacking situation, seems to be what the season is hanging on so no pressure lad.

There is no break for the world cup for League 2.

I think that’s harsh. In previous seasons we wouldn’t have signed a proven goalscorer (DJ and we certainly wouldn’t have been trying to sign another decent forward in the lad who turned us down last minute to join a club in League One.

We haven’t signed him this season.