Carlisle are a proper football club, playing at their quirky home of over 110 years, the largest none all-seated stadium in the league and likely the last remaining that has terracing on 3 sides which of course used to be the norm. Their history is littered with bounce backs from adversity, from ground fires and floods, to lunatic owners, and of course from having already dropped out of the league. The geographical challenge you refer to that we (you) have to surmount once a season (although its no different to say a Hartlepool, Gillingham or Plymouth) faces them every fortnight, and yet they generally have a good away support including many decent ones at ours over the years. By the way, if you think Carlisle’s a pain, wait until you’ve been to Barrow

I certainly wouldn’t want to see them relegated, certainly not while the anomoly of Salford survive. And a trip to Crawley or Forest Green rather than Carlisle?? Really???

The geographical challenge you refer to that we (you)

although its no different to say a Hartlepool, Gillingham or Plymouth)

Just like Plymouth the other way, but that won’t happen any time soon.

I certainly wouldn’t want to see them relegated, certainly not while the anomoly of Salford survive.

You have your clubs you dislike going to, I have mine

And a trip to Crawley or Forest Green rather than Carlisle?? Really???

Yeah, really. Forest Green is about an hour and half away and is actually an interesting developing club.

You have your clubs you dislike going to

I enjoy all away trips, and if I didn’t I’d just not bother.
Some are better than others granted, and some take longer than others to get to.

And by the way I didn’t “misquote you”. And your later post mentioning Plymouth was being typed the same time as my response.

Yeah you did, I copied the bit where you did. but hey ho, I’ve made my point and explained where you got my (not our) position wrong. Done interacting now

No I didn’t. You only selected the first bit of my sentence, which changes its meaning - so you actually misquoted me.

Was the original sentence, and the reason I said (you) in brackets is simply because I don’t have to surmount it because I live 60 or so miles from Carlisle, simple as that. So the high horse you subsequently decided to mount was for no reason whatsoever.

Anyway, should be a win. I’m sure the thousands of Walsall fans in attendance will be creating a red hot atmosphere at one of the most exciting away days on the calendar.

“sigh”, yep. I’ve only missed three this season and watched one of those on iFollow

Fantastic, have a safe journey and brilliant day

Opposite the ground is the Beehive but generally rammed with Cumbrians with spears, but head a bit further into the town & head for the Station, there are 2 Spoons & of the pubs I have been in myself notable mentions are Brew Dog Carlisle ( Next to one of the Spoons ) The Griffin or the Thin White Duke and if you want good nosh try the Last Zebra. I was working up there and stayed for just over a week and still have the hangover.

Im going for a 0-2 to the soaraway Saddlers.

if you want good nosh try the Last Zebra

I’ll be driving as the train fare would make Rockefeller think twice so won’t be drinking, but I appreciate the recommendation for food (always welcome!

), I always try and see a bit of the towns we go too, so thanks for that!

To be fair it’s no slant on Carlisle the place, I just find it a sparse crowd with little atmosphere after a 3 hour plus journey, as a town its not bad.

but head a bit further into the town & head for the Station, there are 2 Spoons & of the pubs I have been in myself notable mentions are Brew Dog Carlisle ( Next to one of the Spoons ) The Griffin or the Thin White Duke

Botchergate, 2 mins walk from the station. Probably one of the best streets by a station for pubs in the league. The two Spoons on Botchergate are two of the better Spoons you are likely to encounter, I think many now are starting to get a bit tatty.

I’ve done Carlisle by road and rail many times from Walsall, I think by road is simply boring more than anything, but by train its an absolute piece of cake. 2hrs 20/30 from Wolvo. You could actually get a train at 11.37 and comfortably make the KO, or if you want to make a day of it even at this late hour its fifty odd quid return with an early start and a change at Preston, arriving into the pub at 10.50 AM.

I have only done it on the train once and I have to admit it did take the pain out of the journey. Early start, few cans on the train and arrived in time for the pubs to be open. It was the first game after we sold Fox and Dann. Think we had some kind of deal because there was over 10 of us travelling and got it down to under £30.

I have also done it on a coach for the game in 1995 when they were top and beat us with 2 late goals. That journey was painful, no beer allowed on the coach and we didn’t get there until 2.30 so only time to force a couple of quick beers down us. Did a minibus for the first game of the season in 1993 I think it was, 4-3 win but being honest I have very little memory of that day .

I’ve always liked it as an away day, probably cos I have some decent memories but I can understand why people don’t fancy it.

I can’t make it tomorrow, unfortunately, hoping for a win though and back to back wins. 1-1 It is then.

Proper club, proper fans, good away day. Plus it’s not a bad journey for me as Wigan is already half way there. Getting picked up on motorway early by a min-bus leaving Walsall even earlier

See you in the Beehive UTS

Any type of win tomorrow will do. It would be very Walsall to follow on a win like we had on Tuesday with a loss or a draw to a team struggling for both points and form. Hopefully the team won’t turn up and think that will be enough to see the game through.

Did David Reeves get them both? Blond hair I think, he had a few years at Chesterfield as well. That was one of those games when it felt like a humongous defeat, but then we went on a really good run till the end of the season.

I think you are right. We really deserved to win that game and yeah it felt horrible. I remember being sat on the coach with my Dad after the game with very miserable faces as their fans took the p***. To be fair to Carlisle they beat Chesterfield for us on the night we won at Scarborough to set up that memorable night at Bury.

I loved that season it was such a great race to the line. It felt like Chesterfield never dropped any points, they obviously did but at the time it just felt like “jeez they won again” I guess they felt the same about us also.

Footage of games you mentioned… 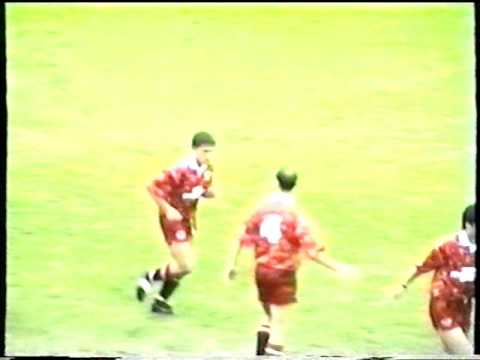 95 just before Christmas the year after promotiom (featuring me behind the goal bottom right running down steps as we score).

Yes, two goals for David Reeves. He wasn’t as blond as I thought, I might be getting him mixed up with another blondie who had hair that made him easy to pick out from the terraces - David Oldfield perhaps?