Ladies and gentlemen, boys and girls, and the millions reading across the world, WELCOME TO LEAGUE TWO 2021/22!

The first stop of this ride will be at the home of Tranmere Rovers as Prenton Park hosts The Saddlers in game one of the new season.

Our hosts go into the game having re-appointed Mickey Mellon as their manager following the departure of Keith Hill just before their play-off failure last season.

Walsall head to Merseyside with a new-look coaching team and also a near new squad of players, with the promise of a better season than last hopefully.

Tranmere Rovers have acquired 13 new players over the summer, with perhaps the most high-profile of those being Callum McManaman, once of Wigan and West Brom, who joins them following a stint with Melbourne Victory in

No form guide for this game as pre-season doesn’t indicate anything.

@TheBostedSlab can do the honours this season of players to play for both clubs.

Who is going to the game? Who is confident ahead of the season? Does anyone on here think we need another striker (can’t seem to see it mentioned anywhere

Predictions for starting XI welcome, but I’d suggest it will be as close to the team that started vs Cheltenham as possible, with Carl Rushworth to establish himself as the number one from the start of the season.

A win would be excellent for what looks likely to be a big saddlers following . But I would take a draw before a ball is kicked which would be a solid start against a decent Tranmere team who I expect to be there or there abouts come the end of the season

First game away draw.
No Holden or proven striker , no attacking options off bench and kinsella will play alongside labadie so we will lack attacking threat but be solid imo so for me a solid 1-1 to start the season and get us ticking along

There may well be others before my time, or I have forgotten.

There is potential for another three names to be added to the list on Saturday, should Ash Taylor, Manny Monthe and Joss Labadie make their competitive debuts for the Saddlers.

I’d take a point in the opening away fixture 1-1 will do nicely looks like we are going to take over 1000 from the amount of tickets sold on the other thread,excellent support don’t shut up all game and sing your hearts out it’s been a while UTS

Posted to the wrong thread. 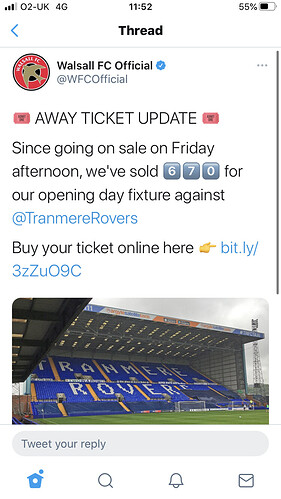 Really can’t wait its going to be some atmosphere. Win or lose. I think all walsall fans can agree we are heading in the right direction.

Yes and perhaps give the new management a bit if slack at the start of the season.

They can have till half time.

Those undecided, get tickets. Those going, actively encourage others.

Been a long time since our last big away day. Let’s back the lads from the off.

I reckon Walsall have one of the best opening day of the season records in the football league over the last 20 years.

Just to shut the tranmere lot up about how many we will sell. They are all over social media

Bloody brilliantly in my opinion, they’ve literally been on sale one working day. Guessing plenty will purchase from the ticket office.

I reckon we may double it.

With the same sort of buzz around the club, new management, new owner new era, etc back in 2019, Northampton away we took about 1400, so I’d imagine about the probaly slightly less with slightly further to travel

Its already a great sales figure really, can only imagine near a thousand with everyone itching to get back

absolutely gutted i cant make it.

if we say we’ve got about 3 thousand hardcore as a base,

As a percentage our away support must be up there with some of the best with a sniff of any success on the cards.

I hope plenty of other sides bring bumper followings to bescot too. It makes us play better

That’s a nice £837.50 donation to Ticketmaster by Walsall fans. I think a lot will be waiting to buy via the ticket office this week so we should easily match the Northampton figure.