League 2 to merge with National League?

I think it’s just media speculation and is unlikely to happen, but who knows we are in uncharted waters. 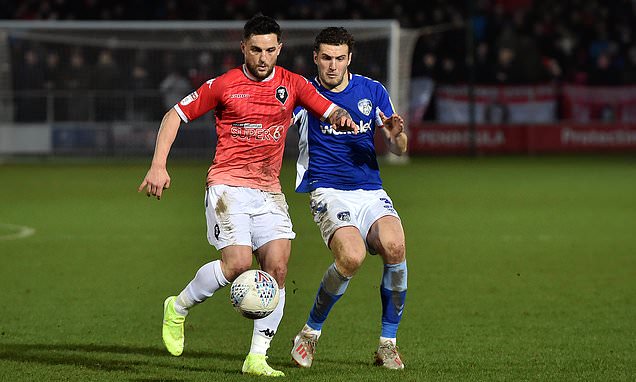 Radical plan to merge League Two and the National League

EXCLUSIVE BY OLIVER HOLT: Chairmen at lower league clubs have had discussions about a restructuring of the divisions that would merge League Two and the National League.

Would mean a lot of level 5 teams having to get their grounds up to League standard quick-sharp. Sure I read that Barrow are waiting to invest in appropriate ground changes until their promotion is confirmed.

That said, if the EFL think Salford’s ground is passable the standards can’t be too high.

That said, if the EFL think Salford’s ground is passable the standards can’t be too high.

The toilet facilities were pretty state of the art though!

Only be good for me if they draw the line north of Walsall though.
Make my life impossible if we were in the northern section.

Would be good for me if we were in the Northern half. Half an hour drive to both Fylde and Chorley.

Difficult for us geographically. Could be in the same league as Hartlepool but not play Solihull.

This is the problem of being centrally located. Due to this there is a possibility of being moved from the northern half one season to the southern half the next. Happens a lot in non league. For example,Hednesford are moved on a virtual annual basis.This season they have been in a different league to Stafford Rangers despite literally being next door to them, but they have to travel to the likes of Downham Market and Leiston.

Play east half and west half then.

There was due to be a significant restructure of the non-League pyramid, involving mainly Northern clubs, this summer, but I think that this is likely to be put on hold for 12 months. We are likely to see a shortened version of the top divisions in non-League football on a temporary basis, just for next season. It will depend upon how long this virus pandemic continues. It might be nearly Christmas when senior non-League starts up again.

Plus points would include new grounds and as we continually demonstrate, we love a new ground.

But all the plus points I can think of are hugely outweighed by negatives. As others say, the geography doesn’t work for us in any North/South split. But more importantly, it just moves the first tiered part of non-league a step higher. Therefore it drags quality downwards for clubs currently in the fourth division and creates a “gap” between the third and fourth division. Over time that gap will inevitably grow and with it, a financial gap too.

Regionalisation also a possible gateway for B teams…

I want the northern end too

The Daily Mail keeps running out of things to write in the sports section, balloons up more and more daft ideas. Next week: League 2 to regionalise with south joining French Division 2, Danish and celebrity teams also to be invited.

They initially did a survey of all 2nd Division grounds for the new set up, and then used the Bescot ‘swimming in pith’ structure as the norm.
Did a great copy I have to say!

Or we could just leave the league system as it is because there’s nothing wrong with it and instead do something about the inordinate wealth in the top flight instead of pointless tinkering like this.

What a ■■■■ idea. Completely devalues league 2

I agree. It is a question of wealth distribution rather than structure. That in itself is driven by around half a dozen clubs at the top trying to compete in a world market with around another eight clubs in Europe. Then it is a question of the other PL clubs trying to hang on to the golden tit for grim life. Then because the Premier League is like that, the Championship mortgages itself to the hilt to try to get there and thus it filters down.

I for one would welcome the big six in England ■■■■■■■ off and forming that elite league with the eight or so others. They can spend themselves to death in their own golden palaces with their own telly deal and their own global marketing.

Everybody else can then get on with a competition that still wouldn’t be perfect but would take a load of steam out of the financial pressure cooker which is modern football. Manchester United, Liverpool, Manchester City, Spurs, Arsenal and Wolves (

) obviously see themselves and the media propagate them as English football’s greatest assets. When in reality they are responsible for killing it. “The saviours”, “the number ones” are actually the leaches.