For those who park on Morrisons, please beware as these signs have appeared on all lamposts on the car park at some point this week. 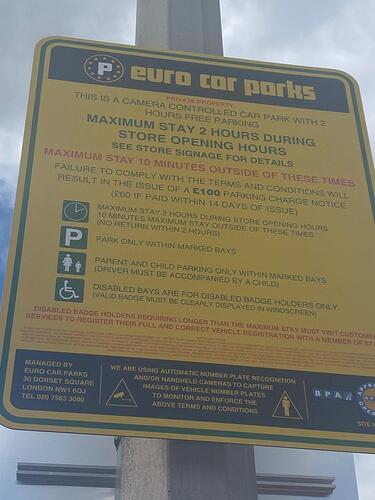 These are bastards to deal with as well. I got caught at the Premier Inn at Kingswinford where they operate the car park. We stayed there for 3 nights last year while moving into our new place and when we checked in, the machine in reception wasn’t working. A couple of weeks later we received random penalty’s for both cars.
I appealed but they weren’t interested, despite sending them proof that we were resident at the hotel. Eventually went back to the hotel and they sorted it via their head office.

Been done by these a few times. Nightmare they are!

When did the store open? We vacated the site in 1990 and have been able to park there for free ever since it did. Was there some agreement to allow that for so long 30 years?) as part of the sale of the land to them?

Whatever, it will put more pressure on street parking around the Poundland.

Doubt we’ve ever had an agreement with them.
More likely that over time, more and more people are parking there so it’s become noticeable and they’ve decided to do something about it.

It takes so long to get off the club, train station and retail parks, I think more and more are parking a short walk away in the surrounding area. Even the Bescot Crescent section from the crossroads up to Wednesbury Road appears to be a lot fuller than it ever was.

I am baffled neither mozzas or the retail park offer paid matchday parking.

Glad you shared this mate - I always use this car park on Saturday and I usually pop into the store and get some booze to celebrate/drown my sorrows ( usually the latter) but I’ll steer clear of both the car park and the store from now on.

Same here I use the parking and go to the store after. Not gonna happen now
Where do I park instead though is my concern

Thanks for sharing Stig.

I used to park on Morrisons, just park up by where I used to live on the Delves now

Where do I park instead though is my concern

Have you tried Grand Junction Way?

Same here, I haven’t lived in Walsall for years, so I’m not sure where is a good place to park. Park and Ride would be a good idea!

At the risk of my spot being taken, if you park on the otherside of the lights across the west brom Road, traffic jams don’t exist and it’s a 2 minute walk. Been doing so for 15 years with no problems

Bloody hell, how fast do you walk?

I still park there and had no issues.

Me and my son park up on morrisons and tended to pick up shopping, there loss. Could understand if car park was full.

Is it anything to do with them selling off some of the carpark space to build a Costa? That’ll reduce the amount available to them.

Doubt it’ll make any difference but you never know…

Thanks mate, would that be somewhere here?