Anyone read the print version? The web link appears to have been deleted:

In case this doesn’t load, the headline is ‘Walsall team-mate branded me a ‘terrorist’’ - assuming it would have been an interesting read and intrigued as to why it’s been pulled so quickly!

Keen to know too!

Maybe the club have asked for it to be taken down?

It’s not a very good article either way. I’m dissapointed his team mates didn’t sort out whoever it was either

Read the article earlier. Said there was a training ground incident and a fellow Walsall player called him a ‘terrorist’.

Kouyhar let it go but then the same player made a second comment and he reacted - there was then an altercation that needed to be broken up.

After the incident Kouyhar expected to be pulled in by management with the other player but he claimed the altercation was never mentioned again.

Said he didn’t take it any further for fear of being seen as a ‘troublemaker’. Article also featured his reaction to the Greg Clarke comments.

Any mention of what Maz is doing now?

Oh, also a comment from the club saying that the incident would have been dealt with had the player reported it.

Interestingly on the original Tweet from the E&S Harry Harris (ex-youth player) tagged Netan Sansara. Not sure if there’s anything in that, though.

Lots of things happen on the training ground and it usually stays there , Walsall have every right to be angered by this as it does not represent the club.

Should name and shame the player. Racist ■■■■■.

Not that it would excuse it

We don’t have any 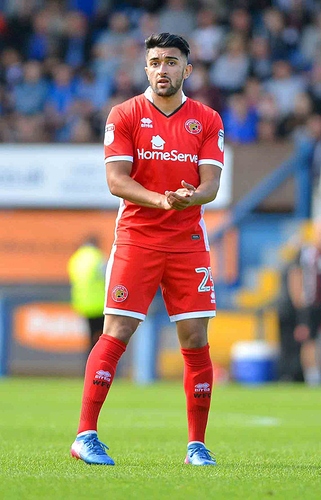 Former Walsall footballer Maz Kouhyar says he was called a terrorist by a team-mate, but felt unable to speak out at the time for fear of being branded a "troublemaker".

Cached version is there - might not stay live though

Seems like a very level headed young man, and i hope he can find another club.
I wonder if the player concerned is still with us? if so he should hold his head in shame and be booted out, but it sounds to me like there was a racist culture there with the coach incident, and if that’s the case the whole club should be held accountable.

IF the coach knew what the altercation was about I agree he should have reported it. If they didn’t tell him he should have carpeted them anyway. That neither happened is poor management of young lads, not necessarily condoning racism.

A real shame that he felt he’d be labelled a trouble maker if he complained. It’s ■■■■ the way we place all the burden on those we marginalise. Really ■■■■.

Joining a few dots either accurately or not, the Luton reference would suggest it was the Keates season. As if that team wasn’t already tarnished as one of the biggest sets of ■■■■■ ever to wear the shirt.

I know it is awful what i am about to say so please don’t judge me for it.

But when i first started on Walsall council for the architects department in 1977, i was working on the new building sites, Dorchester rd in new invention, blockall in darlaston, and most of my work mates were Black and Asian.
We had one old Indian guy who had been a minister back in his own country, and he had retrained as a carpenter, but when he turned up to do the work he was putting the skirting boards on using an old brace,and he was drilling and plugging it, while the other lads were just nailing it on for quickness.

So after a while they took him off the tools and gave him a sweeping brush, and told him just to go around cleaning the houses up to get them ready for turnover.
Which must have been a blow to the once proud man that had held office back in his country of birth, but t least he was still earning a wage.

He used to use our canteen on a dinner time, and bought his food in one of those tin containers, i think they call them tiffins? and we had a white tradesman that took pleasure every lunch time to get to the container before him, and throw it on the roof.
At the time i was only 17 and the guy was the site bully, and i was advised just to leave it and not say anything, i had already gone through a site initiation ceremony at his hands, with him nailing me to the floor(with the help from others) and removing my trousers and underwear.

I HATED him for what he had done to the old Indian guy, so we fast forward to about 2000, the tradesman is still working for us but i don’t see him or have anything to do with him, and he passes away, so the council give us half a day to go to his funeral, and i go.

As i was standing outside the crem, talking to about 20 work mates, one of them shouts over to me " hey chunk, how come you have come you didn’t like him?"
And i shouted back " well i just wanted half a day off to see the bastard burn"

No one will buy the book if you share it all on here, Chunk!

That’s me all over mate, doing myself out of business

don’t worry i have many many more