Take him in a heartbeat, ridiculously maligned in these parts.

Yep, me too. Easy win for him here. Relatively cheap to buy, unite the club and the ground, hero. Instantly extra £400k in the budget without additional investment, 1 if not 2 quick promotions if the chequebook comes out and still way below what he’s spent at Newcastle to be hated. 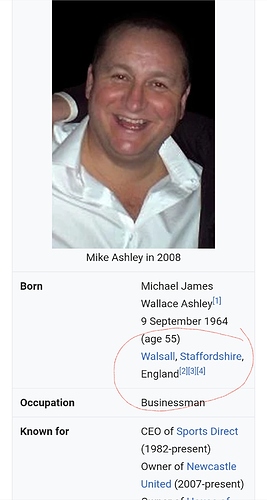 He’s looking for a club with PL potential by the sounds.

Far more likely to be Coventry, Birmingham or, dare I say it even Sunderland. In fact I think he’d love to take over at Sunderland and ultimately stick it to the Geordies.

With the money he has, Rushall Olympic could be pl potential

Come on Mike, you could be the biggest ■■■■ in the world, but if you gave us something to shout about again i would sell my soul to the devil

No. Absolute scumbag who has no respect for anyone else.

No thanks, likely to turn the Banks’s into a victorian workhouse producing giant mugs.

He would fit right in. Wouldn’t be Walsall without a chairman that fans can display their faux outrage at.

No thanks, likely to turn the Banks’s into a victorian workhouse producing giant mugs.

As well as sports bottles and large emblazoned bags i just don’t want with every purchase thank you. I only came in for a pack of sports socks and a badminton racquet!!

Got to agree really. he’s been made into a pantomime villain by the press. A large part of the abuse he gets is because of the Newcastle fans we’re a massive club belief. essentially he’s getting stick for not winning anything, being a “cockney” and not kissing Shearer’s arse. I laughed my ■■■■ off when Ashley let him be manager and he was utter dog ■■■■, after he’d come the biggun and ■■■■■■ about all the previous managers.
Anyway back on topic. He’s better than Dyson who moved his factories to Asia, moved himself to Singapore, planned to have his (now defunct) electric car plant in Singapore, yet was pro Brexit with Britain being great and all, is buying all the farmland here in the UK that he can ( to create his massive Beeswax farming conglomerate), and yet everyone loves him. At least Ashley’s stayed UK based and is employing people here. May be on ■■■■ terms, but that’s the same for all those kind of jobs no matter who the boss is.

Can’t argue with that

Working class self-made billionaire business man from the West Midlands? Got to be a wrong’un surely?

If he didn’t treat his staff like ■■■■ I wouldn’t be against the idea. But, for that reason I’m out.