Just want to garner everyone’s thoughts on the squad for next season and where and in what way you think we need strengthening.

We’re bulky in both central defence and midfield. In defence, there’s calamity Dan, Sadler and leak. Someone mentioned luke Zona was academy scholar of the season and he’s a centre half? In central midfield there’s talent. Will Willis step up? Do we need another centre mid? If so is it an experienced marshaller; say Mark Duffy or Paul Coutts or another box to box type in the ilk of Holden? The former may allow Bates and the rest to do their thing. Whatever that could be.

Right back we have white. We need cover possibly? We need a left back clearly. Experience or an exciting loanee?

Without a doubt. We need two quality wingers and at least three strikers. One proven, one tall and one quick.

Depends what formation we will use got a feeling we might adopt a 352 formation, this only based on matty taylor being a wing back though. Or is it Fullarton who decides on formation and style of play? Hopefully the fans forum will be soon and we can get these questions answered.

Gk - We are OK although I’d like to see Roberts shipped out and replaced with some experienced gk.

LB - 2 new additions needed would have Melbourne back if cheap enough and and get Nurse back.

RB - 1 new rb preferably a starting RB rather than a squad player.

Wingers - 3 wingers I’d push the boat for 2 of them, and get a youngster on loan

Attackers - this in my eyes is where the money needs to be spent the most 2 marquee signings is a must. Then 2 players with potential who can play in a number of positions and a young lad on loan.

So 10 permanent signings and 3 loan signings.

That’s a stretch but I do agree completely and would love the same, just wondering whether all that can be done. I reckon one area will foresake the other. For example, two marquee strikers will compensate for less depth in defence?

I think alot will depend on brentford getting promotion.

More general, two central defenders (better than average level in this league), two offensive players and few more, even average ones, to complete the squad.
And btw, Scarr and White signed new deals? Must have missed that.

When do they have to say whether they are signing the deals or not? Is it end of the month?

Random… Any1 remember herivelto… Or junior

I just hope that Taylor and Fullarton know how they want us to play and bring players in who can actually fulfill the roles being asked of them. We can’t afford a situation like the Whitney era where we signed two wing backs and ended up reverting to a back four after and handful of games.

We also can’t be dealing with continually changing the formation if we don’t have players who can play in a formation/system they are being asked to. When Clarke first took over everyone could see we were crying out for a right winger. We ended up playing Rory Holden out there and completely nullifying both him and the team because he wasn’t up to the job (he’s fine out there now, but nothing more than that)

We just need round pegs in round holes, with a couple of versatile players thrown in the mix

Neil mcdonald is such a bonus to be with us.
He might be our assistant but trust me he will show MT the managing way. Jf will bring the best in some way I don’t fink we’ve had dof bfre
Jus 1 thing left the freehold of the fat greedy pig jb. And we all fresh and set to conquer

Would love an experienced keeper in but ultimately the two staying on makes that very unlikely until perhaps January when contracts start to run out.

Clarke used his budget to get in J. Clarke, Guthrie, Sinclair, Lavery to fill some of those positions so he at least got that opportunity even if he messed it up.

Then you add depth with loans and the odd punt but those are the ones the management team and Fullerton need to get right to have any sort of challenge next season at the right end.

My fear is Taylor might have to really overachieve with the budget he’s given to fill those 5 positions with enough quality and then make sure there’s enough depth aswell although guess likes od Scarr, White and Osadebe signed up for next season is partly that, hopefully all three will just be squad players next season rather than regular starters if the first two sign up.

I think the advantage we have here is Fullerton as seen a few games since he took over and just like us all knows where we need to strengthen, when Clarke, Keates etc took over that wasn’t the case so signed players they feel we needed, Lehay and Devin signed as wing back (and tbf both decent doing that) however that was dropped quarter of way in to revert to 442, this never suited and exposed their defending qualities.
Fullerton will have an idea on the way to move forward and imo they won’t be signed for the sake of it, they’ll be signed because they’ll fit in to the way he wants us to play, this imo will see some consistency at the club and this is long overdue.
11 players made up of a decent keeper, commanding centre half, box to box midfielder and a striker getting you 15 goals plus and everyone knowing their job and creating on field understanding is all what’s needed to get out this division we deservedly find ourselves in.
I’ve belief that Fullerton, Taylor and McDonald with the backing of Pomelett will get this right this season, let’s be honest they have to don’t they ?
Fully

That all sound very expensive

Expensive? We are ‘a well run club’ don’t ya know!

Loved reading the Crow (above) was great until the second paragraph, then Walt Disney took over his narrative.

11 players made up of a decent keeper, commanding centre half, box to box midfielder and a striker getting you 15 goals plus and everyone knowing their job and creating on field understanding is all what’s needed to get out this division we deservedly find ourselves in.

We’ve been saying this since we crashed out of the Championship. Let’s hope the club deliver on it this year…

If Holden has overcome his injury and stays, I think he and Osadebe will pose a major threat at this level. Perry and Kinsella can complete a competitive midfield, although I agree that a leader on the pitch in midfield has been lacking.

Scarr, if he stays, is OK so long as he does not have the ball at his feet. In this crazy season, we had a combination of largely solid defending with goals given away by unbelievably stupid errors and Scarr has contributed to both. He is a threat at set pieces too.

I am optimistic about next season but we may have a slow start. The task over 2 years is to get us out of this division and then build on that. We are not going to go directly to a top League 1 team overnight but the players retained are decent for League 2. Our biggest problem is that we are looking for at least 3 strikers when it is hard to find one good one.

In the “old days”, most of the local teams had British players, many of whom would come to us when they had passed their peak and do a good job. Ally Brown, Nicky Cross, Don Goodman and so on. Nowadays, most of the players are from other countries and have no desire to stay, so that route is far, far weaker. A more plausible route could be other countries, where the lower leagues are not so strong as here but Brexit has made that much harder. 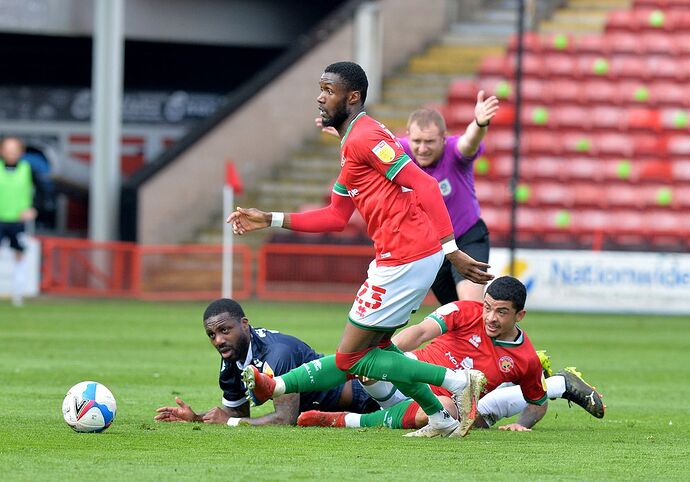 Former Walsall striker Elijah Adebayo can see similarities between himself and Emmanuel Osadebe and has backed the midfielder to continue to shine for the club.