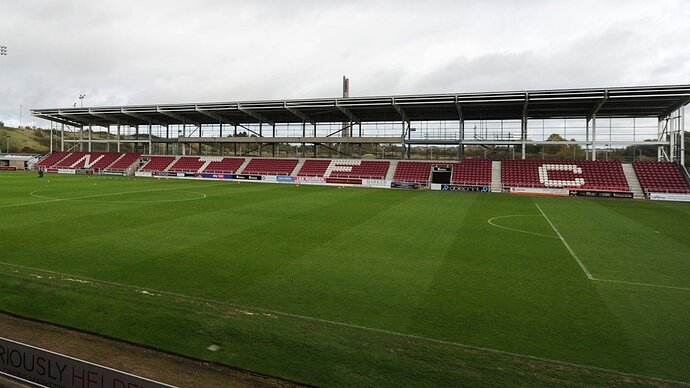 Our Sky Bet League Two trip to Northampton Town on Boxing Day has been postponed.

Ffs I was looking forward to that one😡

I don’t suppose it stood much chance as they had to isolate for ten days.

Well at least we will be 4 unbeaten

Hard to believe that many pro footballers have still not taken the jabs.
Saw a video from Deeney, who said that he was on a ventilator after catching covid, then had the audacity to acknowledge that some that he knows in the profession had not taken the jab, and he accepted their stance! balderdash, everyone should HAVE to take the jab, do they not know that they could be killing people? Apparently it’s also the ‘in’ thing amongst school girls that they refuse!
I am utterly appalled at such stupidity.

Looks as if football might have to be mothballed for a month or so, getting ridiculous now

Even if you’ve been jabbed you can still catch Covid. My daughter would sadly attest to that.

But we should at least try to protect our loved ones and everyone else too!

Shouldn’t be able to play if at a ground where supporters need passports.

As mentioned being jabbed does not stop you catching or spreading Covid. That’s not me giving a reason not to be jabbed by the way. You mentioned school girls. My 17 year old daughter is double jabbed. I’ll be honest I was against it. She is fit and healthy and not at a high risk from Covid. She wanted it, her Mom wanted her to have the jabs so I agreed. I will not be letting my younger kids have the jab That is my decision to make (for now). I am not against vaccination at all but do we really want to live in a world when you “HAVE” no choice ?

Regarding the football. This will no doubt happen every winter for many years. It is probably time to think about playing through the summer months, as Covid and new variants aren’t going anywhere.

Sorry blazing, I think that we all should have no choice in the matter. Covid will be with us forever, like flu that also kills many thousands per year, covid will continue to wreak havoc for many years to come…We will have to learn to live with it, it ain’t ever gonna go away.

Strange argument seeing as we aren’t forced to have the Flu jab. You have a choice and that is the way it should be.

More games Holden will potentially be available for

Who is this Holden you speak of Doddy?

It’ll be a praise the lord jesus miracle if he comes back and stays fit.

The ‘all or nothing’ mentality to vaccines is crazy. So if it doesn’t stop it 100% of the time (something no vaccines ever done) then it’s not worth it?

Righto. I see someone died in a car crash in Manchester a few days ago. Guess seatbelts don’t work right? ‘Greatly reduce the odds of injury’? Dunno what you’re talking about. It’s my choice not to wear one.

I won’t let my kids wear one. They’re young and healthy, a bump won’t hurt them.

No games in Scotland or Europe off?
Swindon platers going for a Christmas party in London was ludicrous.
Don’t like praising Wolves but sure I saw on tele they all got on players coach to get jabbed as a team

Not surprised it is off.Apparently only about 50% of EFL footballers are double jabbed let alone boostered. There will be many more games off if that remains the case. No thought for their employers or their fans.