Clueless, incompetent, inept and completely out of touch. 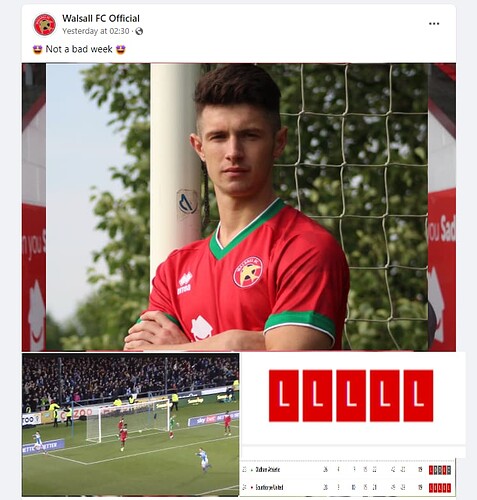 Didn’t we have a D before our latest run.

We did. But only courtesy of a 96th minute equaliser.

But we made a profit again, what are you ingrates whining about?

Things need to take a turn for the better really quickly,because having a real go to me isn’t sitting where we finished last season just as February the season after is about to start.Leigh took a gamble on an untried young manager and it hasn’t worked,now if I was Leigh I’d be asking Matt myself if he fancied mixing it up a bit otherwise no win after Scunny and you’ll be gone.

If there is some some sort of protest “not a bad week” should be on a banner.

The Walsall “me too”.

Considering he’s been successful in his business career it’s bizarre that Pom doesn’t have it in his locker to demand better.
It’s almost as if he’s star stuck by anybody that has played professional football.
Total opposite of Bonser who was down at the training ground bollicking the lot of them when they didn’t perform.

It’s almost as if he’s star stuck by anybody that has played professional football.
Total opposite of Bonser who was down at the training ground bollicking the lot of them when they didn’t perform

Is this the same Bonser that was star struck by Merson and only sacked him in the end because Whallet reckoned there’d be a riot otherwise? And even then he didn’t sack him in person, got someone else to do it.

He does seem very soft when it comes to footballing decisions as a chairman, he fell for that mock interview crap with Dutton so he does seem to be easily swayed.I can imagine Fullerton fed him some beautiful BS and he lapped the lot up then begged for more just my opinion of course.

It’s almost as if he’s star stuck by anybody that has played professional football.

Yep. He lets loyalty/friendships get in the way of making difficult decisions too. Look at Dutton, it was obvious he had a lot of respect for him yet he risked our football league status giving him as long as possible in the job. He’s the same with everyone else at the club.

It’s very poor form given our losing streak but I do think we have had a good week in strengthening the squad and much better than most anticipated.

Yup I’ll take that one mate. He was star struck by Merse as most of us were when he signed.

I personally couldn’t believe it when it was all over sky news that we had signed him.

The problem was he was still being matey with him when it was clear he was an alcoholic and a poor manager. Merson even attempted to resign at one point with Jeff refusing to accept the resignation.

As for Pomlett, I think he is a bit too nice and wants to give people a chance. Problem is in football that’s a big risk as things could turn even worse very quickly and it’ll be too late to turn back.

Bonser couldn’t sack him, as he had money invested in the Virtual Soccer Academy CD-ROM and needed Merson to stay as the figurehead for its launch.
Putting his personal wealth ahead of what was best for Walsall FC.
Number one fan, my arse.

Pomlett states he’s very happy with the board, the club structure, the budget ,the DoF and the "exciting"young coach. He also thought that a similar outcome last season was unacceptable- his word ,I think. I’d like to know just what the hell he thinks is going wrong. Does he think we’re literally cursed?