Anyone know when the squad report back for pre season , bearing in mind we play the Villa around a month today?

And yes I’m fully aware that the result doesn’t matter !

I think Flynn said they would be back in the week beginning 26th June.

Squad? We barely have enough players for a hand of bridge.

And they’ll each have to take a turn goal unless we go out and sign at least 2 keepers.

Are you personally worried yet mate?

Nah! Maybe one of the 4 signings we had in the bag nearly a month ago but have just forgotten to announce will be a goalie?

We barely have enough players for a hand of bridge

You can be dummy

We certainly need a goalie mate so I’d agree that we will be announcing one.Like I’ve just said on the other thread to reopen the early bird for a fortnight and not announce new players in that period to tempt more sales would be ridiculous.

Perhaps we could change the Villa fixture to 7 a side, we could just about manage that, I’ll go in goal.

A quality goalkeepeer is of the utmost importance. You can have a decent squad but if you end up with a Jonny Brain between the sticks you may as well start every game giving the opposition a goal start.

Every season it feels like we are light on numbers while every other team are busy making moves.

to reopen the early bird for a fortnight and not announce new players in that period to tempt more sales would be ridiculous.

Its still the same marketing team mate so anything is possible

Its still the same marketing team mate so anything is possible 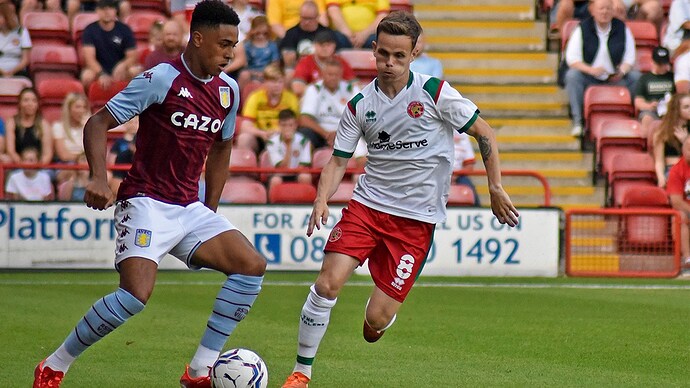 We can confirm the Middle and Upper tier of the Poundland stand will now be open for our pre-season friendly against Aston Villa on Saturday 9th July, 1pm.

Has the Villa allocation all gone and we’re letting them in our end?

BTW There were a few Villa fans in the Stadium Suite before last year’s annual pre-season against them. The ones I spoke to were all very complimentary about the facilities in there and a few even said they were so impressed they might come back to watch us in a league game or 2 when their own games didn’t clash. Seems only our own fans think everything about the club is crap …

Anyone know how to buy a family ticket for the villa game? it will only let me add an adult and child as seperate tickets no family ticket option there is meant to be one for 16 quid.

Incorrect. Steven Gerrard HAS been to the Bescot before, to watch his cousin Anthony play for the Saddlers. So, he is well used to the noise inside the fortress, second only to Ibrox on a European night, I’m led to believe.

1 Like
bgyamyam 5 July 2022 11:02 #20
@
New signing Liam Gordon suffers “freak accident on training ground and has had to require an operation on a foot muscle injury.”
next page →