Morning all. Here is the first table of the new prediction season. The world was not set alight yesterday as many of the predicted faves / home bankers didn’t win so scoring was pretty low. The winning score was ProfessorPeach with 4 points - well done!

It was great to see so many people joining in - think we had 50 predictors which was good. It’s a long old season and few will fall by the wayside but hopefully we’ll have a good tussle for the title between a lot of people.

If you forgot / didn’t join in this week, no problem, just start up next week! One rule I didn’t mention in the intro thread was that if anyone doesn’t predict for 5 weeks in a row, I’ll assume they have given up and take them out of the table (to be returned if they start again).

Next week’s games are up and running so get your predictions in before next Saturday. 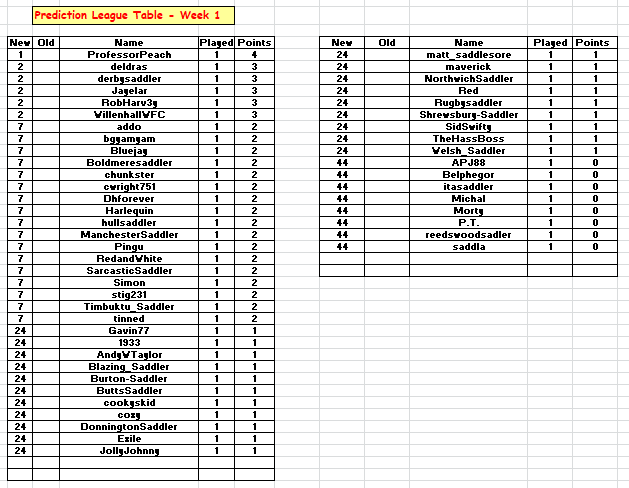 well, as I always say if you start off at the bottom the only way you can go is up!

Where is @matt_saddlesore ? has he scored a duck or just not entered this year? maybe want’s to give us a head start?

Should have copied Mancs more closely.

Surely I should have 3 points …

This is definitely the highlight of my UTS “career”!

If you play by your rules and not the rules of the comp, then yeah, I guess you would!!

Got a bit unlucky with a late Orient goal denying me a correct score. I’ll settle for being off the mark for week 1.

I’m not sure Professors should be allowed to enter, or at least should be handicapped

Always good, when you start so positively. But after first game everything is possible, especially in this crazy season.

Got a bit unlucky with a late Orient goal denying me a correct score. I’ll settle for being off the mark for week 1.

You’re starting to sound like a certain someone else already!!

The pitch is the same for everyone!!

We could break his typing finger?

Surely I should have 3 points …

I did warn you Andy …

No no I wasn’t disappointed at all. Happy with a point for week 1.

The best predictors start slowly, then gradually pick up momentum, there may be good and bad weeks, but eventually they become an unstoppable juggernaut of triumph, dominating others and shaking the foundations of the prediction league to its very core.

I have started slowly.

And once more I am waaaaaaayyyyyyyy ahead of you; where I belong.

I have started slowly

I guess it’s better than peaking too early!!

Though to be fair, I seem to be firing blanks

Don’t be so hard on yourself, Matt.