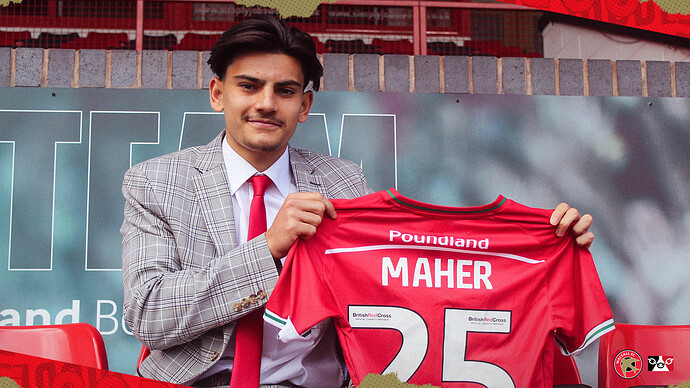 @
✍️ Walsall Football Club are delighted to announce that @ronanmaher04 has signed a first professional contract with the #Saddlers 👉 https://t.co/cakBzYHJlE

Potentially the Best business we have probably done in our history.

Got abit of cockyness about him (not in a bad way before I get pelters lol) , he knows he’s a special talent

Potential could easily be worth 10 million plus in Transfer fees and add ons for the club, if he continues to progress the Potential is massive.

The business done by a certain JW Bonser in the early 90’s will unlikely never be beaten.
Rico is probably next
Maher could be very good of course, but early days.

My lad played in the same youth team as Ronan. His attitude can let him down at times but his ability is unquestionable. Wish him all the best

What would Roy Keane have been without his attitude? Just another midfielder. If Vinnie Jones hadn’t had an attitude and a chip on his shoulder he wouldn’t have even been a footballer because he had zero skill.

Watched him first play when he was brought on against Crystal Palace , first impression Grealish wannabe , hair band , rolled down socks , small shin pads , but what stuck out was …this kid can actually play abit .

So glad the club have given him a deal , and hopefully he can help us get promotion and one day earn himself a money spinning deal for himself and the club .

It’s good he signed a deal. How he develops is of course another matter, but offering contracts to such players is what I would expect from the club. Never forget, It’s an investment. For now, I wish him well and may injuries forget about him.

Happy with this. 3 years gives us security in receiving a decent fee once he is ready to go. Has a lot of potential, but we need to see whether he can begin to fulfil it now.

Speaking to his Dad, he feels he’ll be gone after this season. He said there were other clubs interested, but his development is best served here, for now. Said he hopes RAM can repay the club by them receiving a healthy fee when he does eventually leave.

Ronan Mayer will be signing full professional contract today to sign him down long term.

Only 23 days later than what i said was going to happen, but got there in the end

Great news … especially with it being a 3 year deal this lad looks like he really can move up the leagues and get us a big windfall along the way if he knuckles down and develops the potential he has in abundance.

Don’t know why but I really like that he’s wearing a suit.

Great business for the club

For me, he is a bigger talent than what Rico was when he broke into the first team.

I know that atleast one Premier League team have already sent out scouts to watch him.

Good to see Joe Edwards back covering the Saddlers for the E&S.

Walsall youngster Ronan Maher has seen his breakthrough into the senior fold rewarded with a first professional contract.

Ye love it to, he’s clearly tried to make an effort … brilliant

Sounds like his dads his agent and will sell his son as soon as a big club comes sniffing lol. They are Man U fans! They need some decent kids

His dad is more than happy for him to play here, my mate speaks to his dad alot and they think highly of the club.

Just need to give him the minutes now, Sam Perry was being talked about in similar tones two years ago.

Give him a start tomorrow off the front two and see what happens.

Can’t wait to see how he grows