On Saturday 25th June, one of our fellow Saddlers, Ryan Harvey, was attacked in Blackpool in what was seemingly an unprovoked and very violent attack.

Ryan was placed into a coma and taken to Royal Preston Hospital where he was cared for and it had been hoped would recover well.

A page has been set up to help Ryan’s family pay any associated funeral costs and it would be amazing if the UTS family could contibute anything they can to help.

Ryan was just 22 years old, and has been taken away from his family, and his love of Walsall Football Club in such a cruel, unwarranted manner. 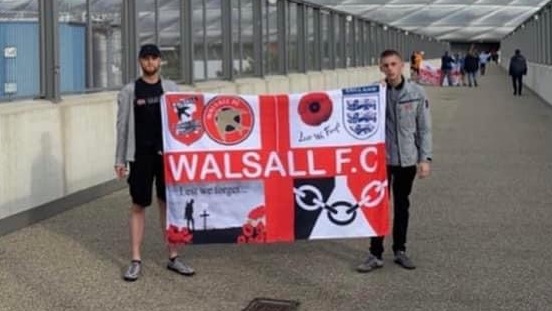 As some of you will know on Tuesday 28th June Ryan left this world. To many of us Ryan was a mate, a fellow sa… Jim Butler needs your support for Ryan Harvey

Conor Wilkinson has donated £100 to this. What a man.

Finally, not to detract from the main post in any way at all, but there were two Walsall FC supporting females that took a bit of a kicking too, and @DanG_WFC was there and took quite a bad beating too, whilst trying his best to keep Ryan awake.

I’ve seen Dan today and he’s in OK spirits at the moment but I would like to say what a credit he has been standing by his mate, when others didn’t offer to come and help or check how they were.

Poor lad, knowing he did his best and his mate still didn’t make it. He’ll be feeling awful.

RIP Ryan ,Read about this on twitter ,speedy recovery to all those involved and hope the scum bags are bought to justice

Horrific. 22 years old FFS. What a tragic end to such a young life. RIP Ryan

It really was, and having spoken to Dan to find out what happened it really is horrific. I won’t post it out of respect.

The latest news and information for Lancashire Constabulary

This is awful!!! It’s took the breath out of me!! RIP Ryan, I just don’t really know what to say…

What can you say Lukeyboy, words fail me, they really do. My deepest condolences to the family and all loved ones he leaves behind. He had his whole life in front of him…till some scum oxygen stealing [email protected]

Dear Dan, thank you from us all for being a true hero in doing your best, God bless you sir.

Awful news. Never nice to lose one of our own even more so that he was just 22. RIP fellow Saddler

It shows how bloody good our fans are at times like this, I hope Dan and the others that tried to help him are ok, credit to them.

A few players and staff have donated now.
Kinsella perry foulkes
Walsall are and always will be a family x
Rip Ryan!

Rip Fellow Saddler, Full respect to Dan helping a friend while putting your own life at risk. Condolences to Ryans family. Some people really are scum hope they are brought to justice if it was up to me it would be a life for a life.

There are no words are there. Absolutely tragic.

Absolutely shocking and makes you wonder what kind of people would do something like this to completely innocent fans having a day out with there mates.I know Ryans dad went to school with him thoughts are with the family Absolutely tragic😓

Such terrible news, bless you Ryan .

Where do you begin when something like this happens

Thoughts are with family and friends, and all those that witnessed this atrocity
RIP Ryan x