Merry Christmas, everyone! Our penultimate game of the decade sees the Saddlers travel to Glandford Park to face a resurgent Scunthorpe United…

Following a very poor start to the season manager Paul Hurst has certainly turned it around for Scunthorpe, who currently boast the 3rd best form in the division. As a result, they sit four points and five places above the Saddlers in the League 2 standings, currently occupying 12th place.

Our last away game at Scunthorpe came on 11th August 2018, a 1-1 draw between two sides who would ultimately end the season relegated. Lee Novak (surprise, surprise) scored the opener for the hosts just after the break before Zeli Ismail won then scored an equalising penalty on 64 minutes.

Scunthorpe captain Andy Butler played more than 150 games for the Saddlers and will always be fondly remembered for putting the ball in the Dingle net. He is likely to feature as a substitute today following a spell out of the first team.

Some of our older readers will remember winger John Davies. He scored 10 in 67 games for Scunthorpe between 1955 and 1958 before moving to Walsall. At Fellows Park he managed 16 in 65 and was a member of the 1959/60 team that finished as Champions of the Fourth Division.

Scott Laird, Sam Mantom, Isaiah Osbourne, Nicky Featherstone and Peter Till are amongst those to have featured for both sides in the past decade or so, whilst former Saddlers’ boss Richard Money started both his playing and managerial career at Scunthorpe.

Though we ourselves are 8th in the League 2 form guide, Scunthorpe’s excellent recent record is hard to overlook. Stumping for a 1-1 draw, unless we manage to build and preserve an early 4-0 lead…

They are in great form…cannot see anything better than a draw. 1-1 for me.Thanks for the preview Simon.

Good game and good result. But of course, result is more important.

2-1 to the Super Saddlers

I think I could get caught out in a quiz because I always forget they are called Scunthorpe UNITED and not just Scunthorpe. I never think of them as having two names. Ask next season, I’ll have forgotten again.

Neil Pointon played for Scunthorpe (United) at the start of his career before moving on to bigger and better things at Everton and Man City before his career peaked at Bescot.

There was a game in 93-94 away at Scunthorpe (United) at this time of year or New Year when we let in more goals in one game than we had conceded in total away from home up till then. We’d let in four away from home all season and lost 5-0 at Scunny. I’m hoping it won’t be similarly catastrophic today.

My eternal optimism says a 2-1 win for us.

Team today:
Roberts,Clarke, Scarr,Sadler,Pring,Kinsella,Bates ,Sinclair,Macdonald,Lavery,Gaffney.
Jules is one of the subs!! Looks like 442…if only we had a right winger!!!

They used to have even more, Scunthorpe and Lindsey United…

Is Facey injured? He played the full 90 at Exeter …

So does that starting XI mean 4 at the back with Clarke at RB, or 3 CHs with Pring at LWB and McDonald doing what he can on the right? On Saturday McDonald and Pring together on the left was our weak spot that Exeter were always trying to exploit. We were more solid down our right with Facey and Gordon combining well together but neither start today.

I hope the players know what DC’s plan is for today’s project!

No Gordon either? Maybe he got injured on Saturday. Can’t see any other reason.

He is on the bench…presumably a case of using the squad over the hectic Christmas period. 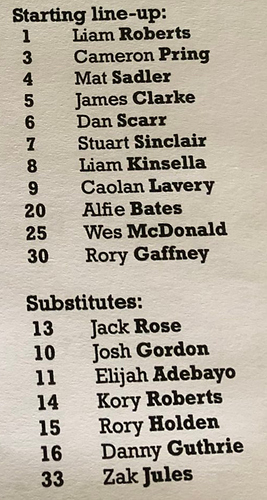 Weak management again, playing Kinsella & Gaffney. Perhaps he feels this one is a write off, and has settled for getting points against Carlisle with a ‘stronger side’?
Scunny are immense currently and will be in the Play Off’s ‘Barnsley’ style in the new year, would love to see a point but not holding my breath.
Jules on the bench! He has obviously been a very naughty boy pretending to be the Messiah!

Could be an interesting game today, the Iron have 4 players out who would have expected to play today, 1 debut and return of a player from injury. Might make it more of an even contest.

Anyone having problems with ifollow?