The EFL have anounced that the new season starts on the weekend of September 12th 2020: 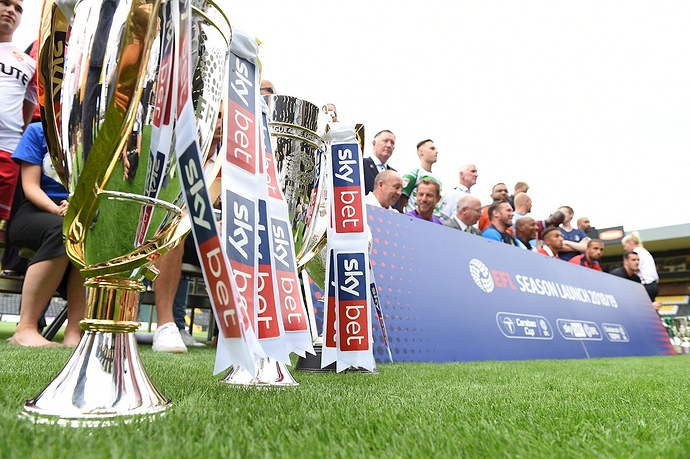 The EFL can confirm that the 2020/21 Season will get underway across the Sky Bet Championship, League One and League Two on the weekend of 12 September.

I’ll miss that then.

I can’t wait personally. I don’t have a season ticket any longer unfortunately due to seeing my daughters at weekends and although they do like the football I’m not going to take them every week on a cold Saturday afternoon in January. Just pray I can get a ticket to the games!!

Get The ST!!! Chances are there wont be any more than two or three home games in January.

And one of them might be a Tuesday night

Tempted to buying me a pensioners season ticket if thats the only way to watch a game.

So listen to this, I have a sensible solution for the EFL but of course they don’t do common sense.

If the season is starting on September 12th and fans aren’t allowed back into the stadiums until October, the EFL Trophy (if they insist on it going ahead still) group stages should be played in the first 3 weeks of the season. Hardly any fans attend the games anyway so the clubs aren’t going to miss out on a fat lot in comparison to if the first few league games were behind closed doors.

Those that wanted to watch could watch on iFollow, those that don’t won’t, and none of us will miss the real football at all.

Just waiting for the call from the EFL now to be appointed.

On a slight tangent from that, how will the FA Cup go this season as the preliminary qualifiers (or whatever they call it for the minnows down at level 35) usually start in July/August even before the league season gets underway? They are going to have to get a shift on to get it whittled down for the real cup games to start (according to many in the media) on the first weekend in January. We haven’t even finished the current competition yet!

I can see a lot of Fa cup games taking place Mid week the season is a month shorter as it is. It would be wise to get quite a few league games in before the winter.

Rob, just STOP talking sense, you know that isn’t appropriate when discussing the world according to the EFL!

These archaic football authorities need a complete revamp from top to bottom.
Look how long it took them to make a decision to start the 20/21season…so frustrating!
I can’t wait for September 12, empty stadium or not.

Wish they would consider Rob’s suggestion and start the league games after all the cup games so we can actually go and watch the start of the season .

I’ve recorded every game on Sky and BT Sport since they have been playing behind closed doors and have watched about 5 minutes and deleted them , they are just not proper games in my mind it’s absolutely horrible to watch with no crowds

Have to agree. Even sound awful on the radio.

Did I read somewhere that Leigh Pomlett said the behind closed doors games could be streamed and ST holders would get a free pass and others could buy a day pass?

Now, if strict social distancing was in place for the start of the season, how many fans could fit into The Banksss’ss’s?
Assume TWO seats between fans. About how many fans would be the max?? Would it be more or less than our average attendance?

2 seats isn’t even a metre is it?
Besides, people won’t be able to pass each other on a row or be sat behind or in front of people so it’s going to be a lot more sparse than you’d think.
Not to mention managing choke points like toilets and the stairs.

While you’re at it, do you have a phone number for Boris?

As it happens, yes!

Thanks,I thought he had said something along those lines.