Torquay away
Hooters
Weymouth away if they get their act together
Possible local derbies v Solihull and Kiddy
Maybe Eastbourne away (weekend in Brighton)
Eventually York, Hereford, and Chester away.
Weekend in Newcastle (Gateshead/Blyth)
We might finally get to see us win some games, and maybe a league or cup (National League North/Northern Premier/FA Trophy or Vase)

Look on the bright side everyone!

Halifax away as long as they don’t get promoted. I can go by bus and have a few pints. Even better if its in 2023 as I will qualify for my free bus pass. Result

I was thinking I’d have a load of new grounds to visit - but half the National League is ex-EFL unable to get back up, so it will be mostly revisits to stadium slightly more run down than last time.

Think how they feel!

Never been hooters. Would the wife approve ?

Well I believe there are wives and even mothers who work there, so why wouldn’t she?

One more positive is that this shows Jeff has definitely gone.

Say what you like about him, but he would have let his pension fund risk its’ league status!

I can’t think of any positives apart from a change is sometimes a good thing.

And it might well be a catalyst to rid the club of these money sucking parasites.

Memories of the old Miners Club in Chesterfield we used to visit pre-match , back in the day.

Reality is we’d probably scrape a top 10 budget, might make the play offs and if we didn’t bounce back … wouldn’t be back for many many many years - Wrexham style

There are no positives to being relegated. I can immediately think of 6 teams in that league who are “bigger” than us, with far more spending power and potential. At most, 2 of those teams will be promoted this year, meaning we would start, at most, as 5th biggest team in that league. There would be no immediate bounce back. Indeed, we would be far more likely to spend years down there. Add in the fact that we attract other income to the stadium as a venue because we are a league team, and relegation would be very serious.

Kidderminster have some of the best pies in football!

Rushall and Hednesford away are something to look forward to.
We are so lucky that Pomlett, Mole, Gamble and of course our genius DOF Fullerton are giving us such fantastic opportunities 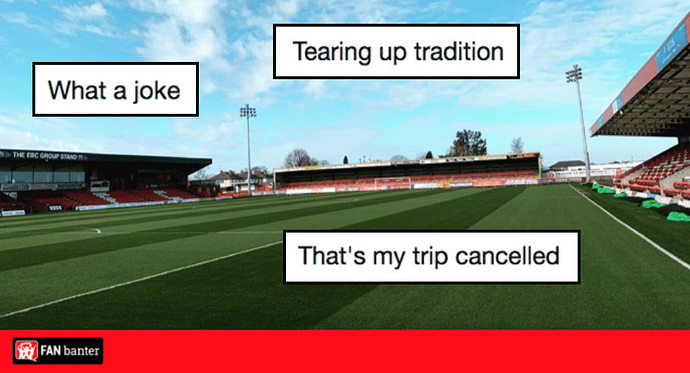 Supporters have been left with a bad taste as Kidderminster Harriers axe an incredibly big yet simple part of matchday experience. Ok, we may be over dramatising it a tad, however the latest decision issued by the National League North outfit hasn’t...

We’d get to play in the FA Trophy.

We should all be very grateful that we have a board with the talent, wherewithal, and ambition to make these dreams a reality!

Now I’ll, very politely, ask you to BACK OFF, and let them get on with it.

That’s it. There are zero positives to relegation then!