That’s a pity, we could have invited them up to the railway for a drink and a chat

They wouldnt have the bollocks mate doubt theyll even be at the return fixture either.

Can’t imagine how you are feeling mate. Maybe you should contact Barrow FC and let them hear from the bloke that was there. Maybe they would react differently.

Standards really falling down in society these days.

Just seen on the news an 87 year old man got knifed to death in London ffs. I know these things are sadly commonplace now but for a mob to be glorifying an innocent fan getting killed is a total disgrace.

Hopefully CCTV or fans nearby told people at Barrow who they are and they can get lifetime bans and community service.

Not the first time in recent years

I’ve been to the vile shithole that is Barrow several times in a non-league context back in the 90’s and early 00’s.

One of their fans lost a leg to frostbite when his car got stranded in adverse weather travelling to a midweek FA cup replay at Whitley Bay. For that reason we were always over the top friendly to them whenever they visited, as is the Geordie way. It was nobodies fault, just one of those unfortunate things. I’ve even seen us let their fans sleep in our clubhouse and travel back in the morning on midweek nights after a lock-in when they were an utterly crap Northern Premier League joke club. But when we went there for the return fixture it was always horribly nasty.

That’s why I posted

I personally find the fact that Barrow’s training ground is in Salford to be one of the puke worthy modern day facts of football. For that reason alone, although I have several others, I genuinely hope they are either back in non-league soon

There are three types of Barrow fans, scumbags, apologists for scumbags, and some genuine ones.The latter in my experience are very much in the minority, and their club’s pathetic response to what happened last night is typical, as is the stuff you can read on twitter and on their forum.

I really hope Walsall FC don’t just accept this. After all we have a joint chairman that gets very hot under the collar and high and mighty when any player gets a bit of stick.

Lets see what he’s made of responding to this disgusting episode.

Had a look at there forum one fan seems to think we are using it as an excuse because we lost believe it or not.Morons

First and foremost, I just feel so sorry for yourself, the rest of Ryan’s mates and family for seeing this stuff. This is the last thing you need and I’m sure you’ll know by now if you need to talk to anyone about it we’re here for you all and just a message/post away.

The Barrow statement is pathetic and basically says nothing is going to be done about it. Proper horrible, inbred little club. Not many of these creatures have pictures of themselves on twitter who are gobbing off (what does this say? Sad, low life keyboard warriors) but the couple that do I really hope they don’t bother coming to the return fixture at the bescot.

Thanks for this @Killer78 I’ve posted it on their Twitter feed asking how the “monitoring of the situation” went after this incident. SLO says that WFC and WMP are in touch with Barrow, so hopefully some bans will result.

I thought their use of the word “derogatory” to describe the chanting was a poor choice for something so serious. I can think of dozens of more appropriate ones, like vile, disgusting, appalling, offensive etc.
Let’s hope they take their actual investigation a bit more seriously than their initial statement infers.

Absolutely contemptible. As a football romantic I was delighted when Barrow regained their FL place. Now I hope they drop like a stone again.

As I thought, Barrow really didn’t give one single shit about the incident. Not really the time straight after our game, could have waited until after their next home game but no. 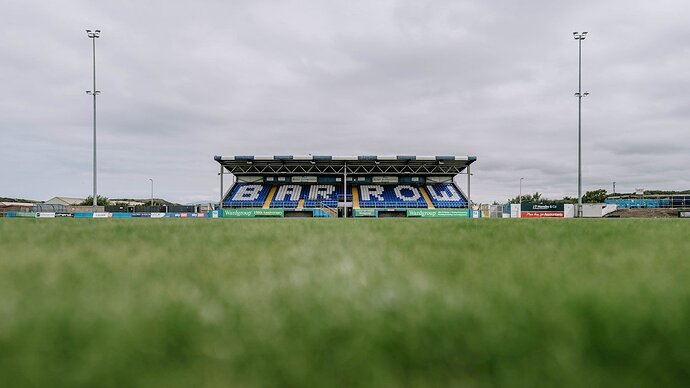 A Letter From The Sporting Director

Tone deaf, as was the initial response.

I have a reason to dislike the vast majority of other league clubs. It’s usually something petty from a long long time ago. Barrow was a bit “meh”, the only thing being the crap view from the away end and the fact their badge has a dingbat on it. However they have now catapulted themselves into a top five (or should that be bottom five) position.

I think our club need to say something now. This is where our SLO needs to feel the temperature and act.

This is where our SLO needs to feel the temperature and act.

Hope walsall ban barrow fans from return fixture, as i can their being trouble, there again they will deserve it.

Would it not be a case for the FA to step in? or do they just leave it for the clubs involved to sort it out

Hopefully we get them away in the FA Cup.

I will come if we can go in their end