Good Friday sees us host Carlisle United at The Banks’s Stadium, in what will probably end up being a Bad Friday for Saddlers fans if recent ‘performances’ are anything to go by.

Now managed by ex-Walsall loanee, and ex-Carlisle player Paul Simpson, who is now in his second spell in charge, recent results have picked up in comparison with those earlier on in the season and they will be hoping to all but guarantee another season in League Two with a victory here on Friday.

Onto The Saddlers and after the players seemingly downing tools we now find ourselves still looking over our shoulders, just in case, 10 points away from relegation with 15 points left to play for.

The fact we are still to even preserve our League Two status speaks a lot about how this club is ran from top to bottom, and much like the effort that appears to have been put into our season, I’ll reciprocate that by putting no effort into our team preview.

What team would you play now?
Can the senior pro’s be trusted after recent showings?
We can’t go down…can we?

I’ll be there, not expecting much to be honest. I’ll look forward to seeing the back of most of these in a few games time.

They will have players that care more for their club

People overestimating Carlisle. Walsall will win this one.

I think they will get nil. Not sure about us.

Looking forward to a nice afternoon.

A 1-0 with a pen fest, to drag us kicking and screaming into another year of this almost unimagineable, Hibbit era extoling gash.

Looking forward to a nice afternoon.

Brill, what are you up to?

I’ll be in Eastbourne without a PC 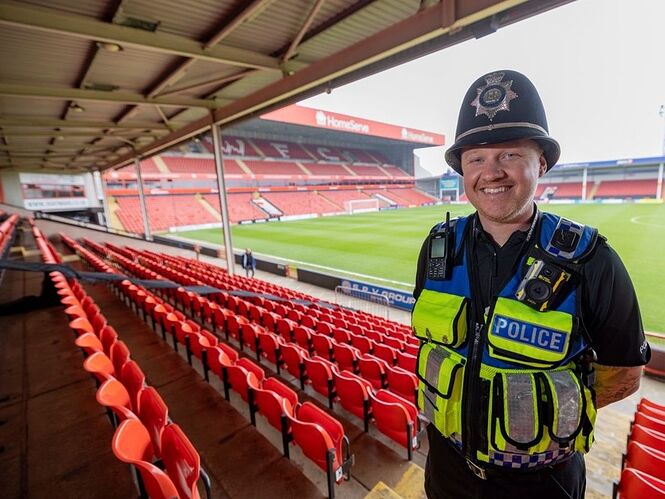 The football unit 'squad' which oversees Walsall FC games has secured the signing of a new dedicated officer.

Does he own a pair of boots because our football is criminal at the moment.

With his cuffs, we could play him in the holding role.
Also, with the governments new laws on protesting, he could give the opposition strikers a hard time too.

But if he’s no good he’ll just copper load of abuse from the fans.

I got pulled over by a traffic cop once he walked up to my window and said, “Papers.”I said, “Scissors, I win…” and I drove off.

Or, you could always try to plat fog?
Not looking forward to the Easter games, think we are looking at another two defeats, can Flynn replicate Taylors run perhaps?
Just hope that there is one team down there that is as bad or worse than us (if that were at all possible) and cannot make up our fragile points difference because very few of us can see us picking up another point this season.

Normally love the Easter period of fixtures but this is all very flat isn’t it?

Think Carlisle have been on very good run of form and pulled comfortably clear of bottom 2 so they come into this as favourites.

That said fancy a 2-1 home win to get out of the malaise. Wilkinson and Rodders goals.

In majorca at the mo and weather tomoz is a bit cloudy so if not doing anything better, i may succumb to ifollow for this one.

Should be okay for a home game from abroad shouldn’t i?

Aye
And a bit cheaper

Might have to get in a few cans of Estrella to get me through the pain of watching it!!