Our visitors, Northampton Town are managed by Jon Brady who is now in his second full season in charge, and who will be hoping to exceed last season’s performance where he led the club to the League Two Play-Off Semi Final, falling to Mansfield Town 3-1 on aggregate.

The Cobblers arrive sitting 5th in League Two with 14 points from their first 7 fixtures. They score a lot, but also concede a few too, having scored 14 goals and conceded 10 goals in those 7 fixtures. All of their fixtures, bar one, have seen 2 goals or more scored in them.

After a pretty successful season last time out, there have been a number of players leave for new challenges, such as ex-Saddler, Liam Roberts, who can currently be found starting for Middlesbrough in The Championship, but of course reinforcements were brought in too. One of those reinforcements was striker Danny Hylton who signed on a free transfer from Luton Town, and he will need to be watched carefully, especially as he will be eager to get his first goal for the club after failing to hit the net in his first 7 games. 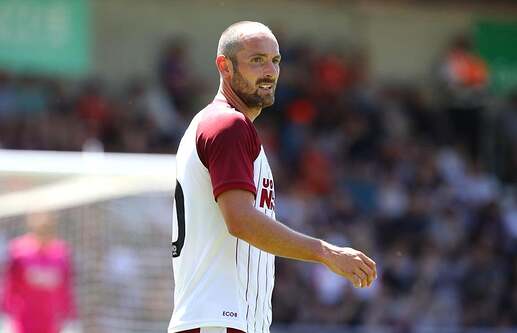 Two other Cobblers to watch out for are the aforementioned Sam Hoskins, who as we’ve seen is top of the scoring charts this season, averaging a goal every 79 minutes, and another ex-Saddler in the form of defender Jon Guthrie who signed a contract extension with the club until 2025, and has proven to be a decent goal contributor with 8 goals in 46 league games last season. Again, he is yet to open his account this season, and netting against Walsall will surely give him a little bit of extra motivation to do it this weekend.

Now looking at The Saddlers and we head into this fixture in a poor run of form. No wins in the last 5 league games, and no wins in the last 7 games across all competitions. Our last win was in the Carabao Cup against Swindon Town. We need a positive result to kick this slump to the kerb.

Michael Flynn faces a tough test this weekend against our opponents, who are considered to be one of the teams up there fighting for promotion at the end of the season, and he will have been encouraged by his squad at Bradford, who although losing, did show some character and fight to get back into the game and to attack. Bradford fans commented that we were one of the best attacking teams they’d seen this season so far, so let’s hope we stay attacking in this one.

Since our last fixture, the club have made two more signings from the free transfer market, 17-year old Jonas Mukuna, who surely will be for the youth / reserve team, and ex-Chelsea player Jacob Maddox who is looking to get his career kick-started before it’s too late. Reports suggest that if he can get performing he could be a stand out player in the league, but based on the last few years he has a lot to do to get up to that level. Fingers crossed it works out for him and for us too. Team news ahead of this game is the same as it has been for most of the season. There are no new injuries to report on, but there has been some positive movement on Liam Gordon who is now back training on grass, potentially just a few weeks away from being considered for selection.

Given the recent incomings, and our current winless streak, who would you start on Saturday? If we play two up top, would you play Cashman over Williams? Would you change the formation? Let us know.

Let’s hope we can put the winless run to bed in this fixture and look forward rather than backwards this season. How many UTS’ers are going to be In attendance? How do you see the game going?

I think we will extend our winless run to 8, but take a point in an entertaining 2-2 draw. Fingers crossed for the win though!

If I’m betting on the fixed odds, I always use Oddschecker. Less choice on the spreads unfortunately.

I would give Cashman an hour see how he does Williams has offered little so far.

If we are to continue with two up front then it simply has to be Knowles who plays alongside DJ. Yes he missed a chance or two v Grimsby but it’s the only game where he’s even looked anywhere near the part.

‘Giving’ Cashman an hour to see how he does, is a ridiculous approach. He either proves in training all week that he’s worth a start or he doesn’t.

Personally I don’t see him playing unless there’s a change in formation.

It is about time we won. 2-0 for me. I would keep the same team who according to most folks played well last week.

I’d start Knowles. Keep backing him and he’ll score and then I think he’ll be fine and we’ll all benefit.

Attack them! Screw 3 at the back and 2 number 4 ain’t working
Show some confidence in your players Flynn
( I know Gordon probs ain’t got but I really don’t rate allen that much )

Is Maddox match fit though? Or will he be sat on the bench for weeks.

If we play anywhere near the tempo we did against Bradford three points will be ours.
We’re getting close to desperate for those points too, there should be a decent crowd to get behind the lads.
I would have Knowles up front with DJ with Williams coming on in the last 20 minuets or so, at 36 that’s how long he’s good for.
I’m not sure Maddox will be selected to start, Taylor Allen has done ok on the left flank, I like that he’s always willing to get into the opponents box to pass the ball off.
MF is till trying to figure out the best midfield formula, we’re certainly not short of midfield players and I think playing Comley and Kinsella together makes us too defensive, especially at home.
UTS.

I imagine it will be now.

I suspect Tuesday will be off as well.

Feckin marvellous @WiltshireSaddler has been waiting for a nailed on 4-2 to come in for the last 3 seasons we get one and the Queen dies.

Will shops etc be closed? If not then why should football stop?