Stop 44 out of 46 on the Leigh Pomlett ‘Giving It a Good Go’ special sees us back at The Banks’s Stadium against our old rivals Port Vale.

I think we got sold the wrong journey tickets as it appears Vale had the ones meant for us, as they find themselves 3rd in League Two chasing automatic promotion with just 3 games remaining. If results went their way this weekend and they won themselves, they are near enough over the line, but one good thing for Saddlers fans to grasp onto is that they cannot be promoted officially whatever happens here.

The Valiants are managed by Darrell Clarke who is easing himself back into the role following a spell away for a close family bereavement, and whatever we individually think of the man I would hope the chants that were directed at him at Vale Park are in no way reciprocated here. During Clarke’s absence, assistant manager Andy Crosby has steered the ship towards League One and left them on the brink of the promotion that they wanted from the off. 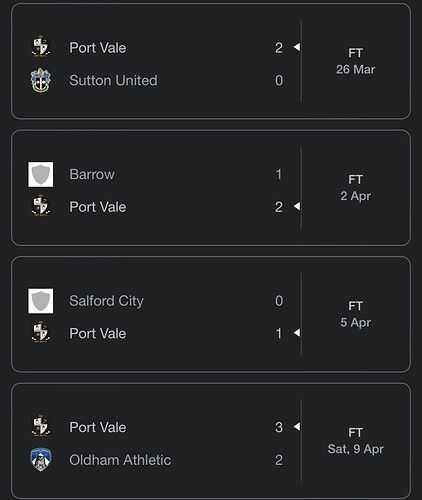 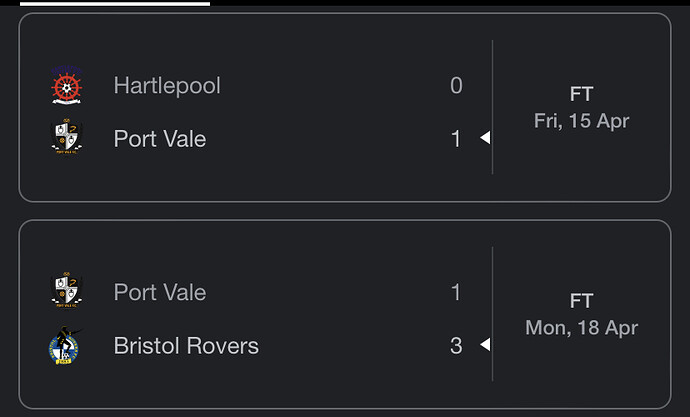 Onto The Saddlers and we are limping to the end of yet another disappointing season, full of false promises that have failed to materialise, again, and with not much to shout home about at all. Gaffer Michael Flynn has said that he intends to give as many players a chance of playing as possible in our last 3 fixtures as he runs the rule over who he wants to keep and who he wishes to dispose of following the conclusion on the season. This could mean appearances for more of the fringe players and some of the youth team such as Shaw, Sawyers, Willock and Maher.

Injury wise we know that Conor Wilkinson is out for up to 12 months with an ACL injury, and Rory Holden is out it seems permanently. There have been a few knocks and niggles recently in games so now we’re safe it will be interesting to see how we line up here - what would your starting XI be?

I can’t see anything other than a Port Vale win here, 2-0 at least, unfortunately.

4-0 vale. They will really want this. I could see this hurting

DC pissing all over the duggout and ripping the card up

I think we will win this. They don’t beat very often and the pressure is on them. 2-1to the Saddlers.

Clarke to take all 3 points and his signed card back to Vile Park!

It hurts because I predicted exactly this scenario when Darrell went to Vale. It went down like a lead balloon on here, but hey, here we are!!

We can cross our fingers and hope for the best with Flynn, but on Saturday it’s a real good chance to sit back and look at both dugouts. The difference is one manager has been fully backed by a fresh, progressive board that know what their doing i.e. have not presided over a decade of continuing decline.

See you here same time again next year folks!! This one could sting - and so it should.

Remember when we spanked them at their place trying to finish in the automatic promotion? Could be role reversal here. Hope there are enough players in our team attempting to make a positive performance for their futures.

At least the ticket was only £13 if we do.I can see some of these players throwing another non performance in here to have a guarded go at the fans they’ll know it’s a localish derby they’ll know about Darrells history with us and will love nothing more than to see us get spanked, 4-1 loss I reckon.

In the Stadium Suite last Friday, Kins was the interviewee they had up on the stage and he said his injury isn’t as bad as first feared and he hoped he might even be back for this game.

Vale fan at work says they have a few injuries at the moment, especially in midfield but I still can’t see anything other than a 3-0 defeat here. I’ll probably head off back to the pub at 2-0.

2-0 to the Super Saddlers in front of a bumper audience.

They will itching to see a reversal of our 5-0 there a few seasons back (remember when we could actually score goals?) and quite honestly I think they will. They will be smarting from their reversal to that shiphouse’s team. Can’t believe Brizzle were relegation candidates earlier in the season! So it can be done, just never seems to be us though.

Can someone remind me of how many tickets they’ve sold - cheers.

As posters have mentioned, we gave them a 5-0 hammering when we were chasing promotion.
I expect them to return the favour but I don’t think it will be 5-0, maybe 2 or 3-1.
UTS as always.

I hope that MF will have them fired up for this and puts out a strong team. If he does I think it will be a tight game as all the pressure is on them to get the points.