As this is a Carabao Cup game and not a League game, I won’t do a full preview as there could be many changes for both sides compared to their league XI’s.

Swindon Town have started their campaign with one defeat (3-0 away at Harrogate Town) and a draw (0-0 at home to Salford City), and head into this game hoping to register their first win of the season in all formats. 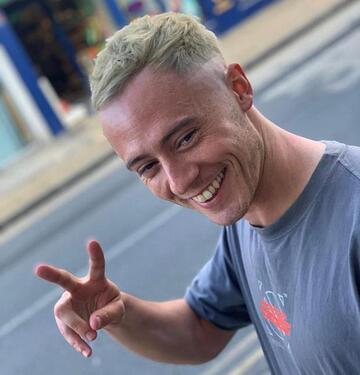 The Robins may or may not have pantomime villain Harry McKirdy available following his sending off against Salford at the weekend. His availability depends on whether league suspensions carry over into the cup competitions or not.

Finally, the visitors boast two ex-Saddlers in their ranks - Reece Devine and Tyrese Shade. Devine hasn’t made the squad for either of their games so far, whilst Shade has started both with an appearance on either wing.

Onto The Saddlers, and gaffer Michael Flynn has already confirmed that we will see changes for this game in order to minimise injuries in the squad.

I suspect we may well see the ‘bench’ players starting, so Ronan Maher, Douglas James-Taylor, Jack Earing, Tom Knowles, Timmy Abraham, Flynn Clarke and Liam Bennett could come in from the start, and potentially Adam Przybek if he’s been promised the cup games. 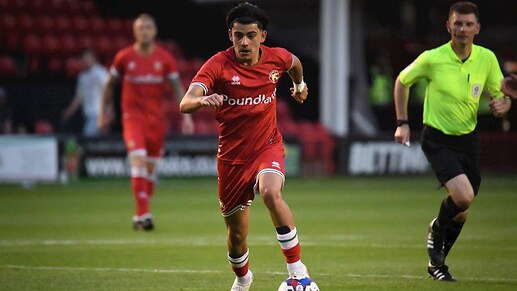 Would you agree with this?

Similar to the situation of the visitors, we may be missing the services of Taylor Allen following his sending off at the weekend against Newport County depending on whether suspensions carry over from the league into the cups. If he is available, and the suspension only counts for the league, I’d suggest he will start this one.

I’ll be there, how many of you lot are attending?

Still a prick even without a pony tail.

I’ll be there. Looking forward to seeing more of the squad in action, particularly Knowles and Bennett. Fingers crossed we can exact a bit of revenge for last season’s drubbings and progress to the 2nd round.

I’m going to wait until I see the team selected before predicting. The bloke between the sticks will be the main factor.

When did you see me with a ponytail?

Yep the number two looks just that after his pre season exploits.

Certainly wasn’t from behind whilst you were up the bar getting the drinks in,that’s according to what @RedandWhite was saying the other day anyway. 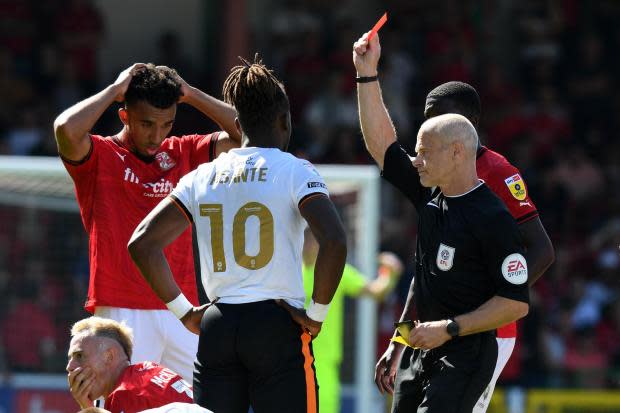 According to this McKirdy is suspended, I was wondering if Allen would be so I guess this answers that one

The rules changed a couple of years ago so that yellow cards only count towards suspensions in the competition in which they were received, but red cards apply to all competitions (with the exception that an EFL Trophy red card only applies to that competition).

So Allen and McKirdy will be suspended for Tuesday but should, say, Hutchinson pick up another yellow during that game it won’t be added to the one he got Saturday for the totting up rules in either the Carabao or L2/EFL competitions i.e. ut would only be 1 in each (but 2 yellows/red would mean missing Stevenage in the next league game).

According to this McKirdy is suspended, I was wondering if Allen would be so I guess this answers that one

Apparently mckirdy wrecked the ref’s office and sprayed shaving foam all over their clothes, according to a post a mate sent me on the swindon town supporters twitter feed.

This is a positive, as it means we can keep our league XI in place.

I think we will win whoever plays. It is about time we beat them.

Agreed - there was probably a chance MF would have rotated him out for Tuesday anyway, but he can revert to Plan A for Stevenage (barring further suspensions, injuries, or a squad player shining enough to stake a claim for a start).

That’s probably pretty close , MF may possibly play Przybek in goal , although thinking about it sensibly he’ll probably leave that until the Papa John’s games start.

I’m gonna say 2-0 to the Saddlers for this, hopefully we can get a decent cup run this season

Does anyone know if the Caraboa Cup games are shown on iFollow?

I hope we don’t make too many changes, I’m going to this and bringing a few others who don’t always attend. Winning becomes a habit and another victory brings with it a sense of further momentum plus the chance to get a Championship/PL giant in the next round.