We finally return home for the first time in three weeks to take on the ‘Crypto Club’, Crawley Town - more info on that here - Crawley Town: The 'internet's football team' aiming for the Premier League - BBC Sport

The Red Devils head to the Midlands sitting 18th in League Two, but unbeaten in their last five games, after a pretty sorry start to their season that saw then-new manager Kevin Betsy sacked and replaced with now-current caretaker manager, 33-year old ex-player, Lewis Young.

Crawley come into this game with three decent strikers that we will need to be aware of. The first of these is former Peterborough and Bristol Rovers striker Tom Nichols who has always looked useful when I’ve seen him, but only has 2 goals in 17 league games this season.

The second striker to watch out for is last season’s League Two top goalscorer, and ex-Newport County hero, Dom Telford, who everyone seemed to be chasing in the summer. His goal return this season is a dismal 1 goal in 14 league games, but he still knows where the back of the net is given a chance.

The third and final striker we need to look out for goes by the name Ashley Nadesan, who this season has a respectable 6 goals and 3 assists from 16 league games and will be looking to add to that this weekend. 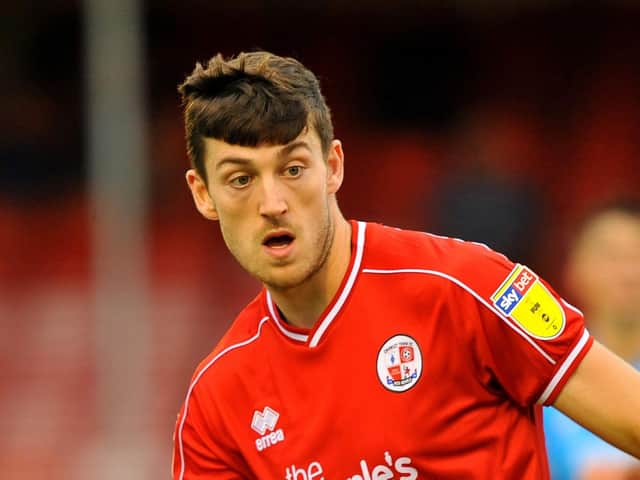 Onto The Saddlers now and we head into this game on an unbeaten run of five games across all competitions.

Last time out we managed to grind out a 0-0 draw at Carlisle United and we are starting to look a solid outfit that could maybe be in with a chance of pushing on in January. Heading into this game, the squad seem to be increasing in confidence, and gaffer Michael Flynn has come out to say his priority moving forward will be to keep loanees Danny Johnson and Liam Bennett at the club past January. There are no new injury concerns heading into this game, but injuries are starting to clear up with the recent return of Oisin McEntee and Jack Earing, and the pending return in the not-too-distant future of Conor Wilkinson and Joss Labadie, all of whom will be hoping to push us on up the table.

The starting XI will be an interesting choice - do you stick with the same XI who took a point at Carlisle, or do you make changes? What would you do? What will Flynn do, in your opinion?

In all honesty, there isn’t really too much to discuss as we are in a decent spell of form, so many of the problems we usually discuss have been put to bed for a short while. Undoubtedly they will be back at some point, but let’s enjoy it for now. If someone fancies a discussion - do we start with Kinsella AND Comley in this game, or is It one of them plus A N Other?

Let’s keep the amazing support up for the team, and hopefully we can secure another three points here and make it six games unbeaten.

Come on you Saddlers!

Fancy us to win this comfortably 3-1 Johnson with a double and knowles to get on the score sheet. Got a feeling we may see Wilkinson return to the squad.

If walsall are to challange for a play off spot then beating teams like crawley is a must. I still dont like two defencive midfielders expecially at home. Would be nice to see wilkinson on the bench but he will need time, to get him fitness and confidence back, hopefully he will be banging in a goal or two in near future.

It will not be easy.Their front 3 are as good as any in the League so control of midfield is vital. 3-2 to the Saddlers.

Nice to be back at home , seems like forever since we played at the Bescot.
Hope the home support turns up in numbers as I dont expect too many creepycrawley fans.
A good noisy support sees us win 2 - 0 DJ and Knowles

Three clean sheets in a row going into this game (when was the last time we could say that?), 5th in the L2 hone form table, Crawley having not won away all season, and a few of MF’s first choice players have now returned to the squad from injury allowing him to pick closer to his ideal starting XI - coupled with possibly a few more floaters coming along to swell the gate as their usual watches are in hiatus due to the World Cup - it’s nailed on a Crawley injury time win.

Seriously, if we play as well as we know we can, and keep it up for 90 minutes, I think we could see another Harrogate/Hartlepool hammering. I just hope that they have the necessary words in the dressing room before kickoff instead of leaving it until halftime this week.

Hoping for a good performance and a comfortable win as I’m bringing my son in law and grandson. Last time was the Tranmere debacle…

5-1 would do nicely please Mr Flynn.

We put five past them in 2015 on a Tuesday night not long after Wembley. We’d been struggling for goals and suddenly there was a flood. Jordy Hiwula grabbed a brace iirc. Brian “The Beast” Jensen was in goal for them, I think he was forty or thereabouts.
We’ve won four league games in a row, some decent results of late, 0-0 all over it.

So far P18 W6 D6 L6 which is as average a season as you can have at this stage,so what I’d like to see now with players filtering back is for us to start to win a good few games starting with this one.A nervy 2-1 win with us holding out through 9 minutes of added time that nobody around you can understand where the referee has found it from.

With our form at the moment i feel this could be a win, in the mould of Hartlepool/Harrogate games

Three clean sheets in a row going into this game (when was the last time we could say that?),

A must win for me, we have to finally close that gap on the play offs and actually stay there for a period of time.

Feels like we are always a few wins away grrrrr

Feels like we’ve barely had any Saturday home games this season, we had three in the first five weeks of the season, but then we’ve had just three since the 27th August.

Another back to back Saturday aways in two weeks aswell to Doncaster and Salford, good job we got a home draw in the 2nd round of the cup next week

Another back to back Saturday aways in two weeks aswell to Doncaster and Salford,

Unfortunately it’s a Friday Saturday back to back

Can’t see anything other than a comprehensive romp for the Super Saddlers, really looking forward to this one and bringing a friend along with me to witness the upturn in recent form.

We will win but I think it will be tighter than some are expecting.