Colchester United are our visitors this Saturday in League Two as we look to arrest a poor run of recent form before it becomes too serious.

The U’s were managed by ex-player Wayne Brown (search him on Google to find an interesting piece about him), but are now led by ex-Premier League / Championship footballer Hayden Mullins, in his first proper job following two spells as an Interim Manager at Watford. The club find themselves sitting in 19th in League Two ahead of their visit, after having a similar season to us last year where they just about managed to keep themselves above the trap door into Non-League.

Players of note for The U’s include Freddie Sears, Charlie Daniels, Alan Judge and Frank Nouble amongst others.

One player the visitors will definitely be missing is left-back Ryan Clampin who is out until the new year having sustained an injury in their FA Cup victory over AFC Sudbury at the beginning of November.

The last six fixtures that Colchester United have taken part in have thrown up the following results:

Moving onto The Saddlers…

We head into this game having not won in 4 games across all competitions and in need of a positive result to keep us in touch with the chasing pack around the play-offs, because somehow we find ourselves not out of touch!

Rory Holden will be missing still through injury, although he is hoping to be back in the mix over the next few weeks, and Joss Labadie may be a doubt following him having to leave the pitch through injury on Tuesday evening. All other players at the time of writing appear available for selection. 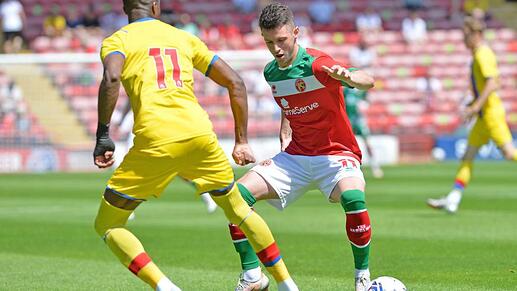 Manager Matt Taylor has a bit of work to do where it comes to the starting Xi as the changes he made on Tuesday didn’t really have the desired effect. I would expect to see Liam Kinsella reinstated back into the team, possibly at the expense of Joss Labadie, with George Miller taking his place back as the striker meaning that Conor Wilkinson can go back to his wide-right berth. I would also like to see Otis Khan given a start, but where that might be is anyone’s guess. What do you think?

This game is crucial for us, and we need three points if we are to stand any slim chance of aiming for the play-offs this season, but I’m not holding my breath. Hopefully are are planning for January already and have targets in mind that we can attain, otherwise I fear another season of nothingness and hollow promises from the board, AGAIN.

Let us know your predictions.

Colchester 2-1
Osadebe masterclass in which he scores and assists all 3 goals all from things he does on the training ground.
Bates to be serving burnt sausage rolls at half time as work experience
Khan to be working from home

We need a performance worthy of the shirt this weekend,a response to some poor displays would be nice some of the players need a good long hard look at themselves and realise there’s thousands of blokes who play football on a Sunday or lower league Saturday football that would give anything to be given the opportunity to play at this level in front of thousands of fans I feel some of them are taking it a little too much for granted.

Lump on Colchester scoring on Saturday.
Just read this on the BBC match report from their game tonight at Bradford.

The visitors failed to net for a fifth consecutive league game on the road - a barren spell that now amounts to seven hours and 40 minutes.

Isn’t Hayden Mullins manager there now? Brown got the boot in March, after his ‘incident’…

So it is, odd, none of the main websites picked that up.

Hes got to change the system. Its rubbish. Id go 352

We sholld have got 6 points from the last 1 games. Bothe Carlisle and Crawley were trash. Colchester look the same. Maybe its a C thing. Gotta be 3 points or a bore draw and leave on 80mins.

Brown got the boot in March, after his ‘incident’…

I think it’s something they are following through with.

I’m sure they’ll get to the bottom of it.

I expect to see changes. I doubt there will be.

If Labadie is injured and out (and he was cack on Tuesday before the injury I might add)… but he’s playing in a dysfunctional midfield… so I don’t know whether it’s him, the formation/tactics - or probably both…

Again, Miller is not a target man, or someone who can bring others into the game that well. He’s someone who runs the channels, gets to flick ons, on the end of crosses or sniffing out chances. He has to play with someone.

There were a few instances in the early part of Tuesday night where Wilkinson had come into the midfield to get the ball, turned his man, and had absolutely no one in front of him to slide in.

I expect much better Saturday.

Lump on Colchester scoring on Saturday.
Just read this on the BBC match report from their game tonight at Bradford.

The visitors failed to net for a fifth consecutive league game on the road - a barren spell that now amounts to seven hours and 40 minutes.

It’s not a problem of system it’s a problem with personal. The reason defenders knock the ball around at the back is because nobody shows for it in the middle. They are shit scared to and the one time our midfielder had the ball deep centrally he tried to be too clever because he didn’t want to pass back and they scored.

It would have helped Earing if Labadie was interested in anything other than kicking the opposition and moaning at the ref and actually showed for the ball in the middle of the park.

It’s for that reason, injured or not, that I’d drop Labadie. It was so noticeable the energy and presence we had in the holding role when Kinsella came on. I also think his ball playing is seriously underrated. He doesn’t play many Hollywood passes but he hardly ever gives the ball away. That’s more useful than we currently have, and more importantly he never hides on a football pitch, which unfortunately I think you could accuse one or two of our players of doing on Tuesday night (how many times did Hayden White, Labadie and Wilkinson actually show for the ball off those defenders?)

Another loss or terrible draw here and more fans will start turning against the club. You could tell Tuesday the atmosphere was flat then starting to turn hostile. There were a lot of boos and jeers by me especially when the players and Taylor came over
Fans have had enough of consistent failure and I wonder if the club notice or care

They cant score goals you say?

Got last minute 3-2 defeat all over it.