Walsall Football Club - So Many Issues

After today’s shit show from the whole operation, as documented by many fans, how many of us are now waking up to the apparent realisation that the club don’t care what we think really, and try to pay us a bit of lip service every now and then?

We’ve had many issues across the years, some more recent that others, that include (but are in no way limited to) the following:

The club must be laughing that some Walsall fans are getting on others backs, instead of directing their fume at them.

Take today as just one example. We’ve had around 18 MONTHS of not being able to go to the ground due to Covid-19. Our first game back at the stadium in that time, for many of the fans, and we didn’t build it up whatsoever to build a desire in fans to want to attend.

On top of that, we then hear and see countless people complaining that their tickets wouldn’t scan and were being rejected, leading to massive queues at the ticket office (that already struggles to cope on a matchday) that when coupled with a lack of turnstiles being open causes a massive issue. I’d love to know how ST’s and tickets that are paid for are then being rejected by scanners.

On the scanning of tickets, even that appears to be half arsed. We’ve got people scanning the tickets in the turnstiles, saving literally no time to them taking paper tickets. Why have we not implemented proper scanners that don’t require staff to scan? Much quicker, much easier.

Food - pictures of burnt food, stories of people queuing for 20 minutes for a bottle of Pepsi, stories of one person only being able to use the card machine and it stopping working. What kind of a shit show are we actually running here?

Beer - How can you run out of beer and then offer bottles and / or cans only, at HALF TIME! Not even after the game.

Communication - granted, this aspect is slightly better. We have communication from our chairman, and we gave a Supporter Liaison Officer to help deal with our queries. This sounds good, apart from stories of the SLO failing to respond in good time to people, or refusing to pass things on to people higher up. Let’s also not forget that for years people have wanted fan representation on the board, and now the SLO has been appointed to be the ‘fan representation’ on the board. Interesting considering within the last six months people have been told that due to commercially sensitive information they would never likely be accepted into that type of position.

We have a customer charter here - CUSTOMER CHARTER - News - Walsall FC - how are they doing in faring up to these standards, that they’ve set themselves

. People need to start holding them to account, to their own standards that they’ve published.

I could go on and on for hours, speaking from my point of view, and I’d also suggest many other fans points of view, and I’d be interested to see everyone’s issues and additional things to what I’ve put.

For now, this is just from today, and this is just Twitter, I don’t use any other socials, and I’m sure there are far more across all the other platforms: 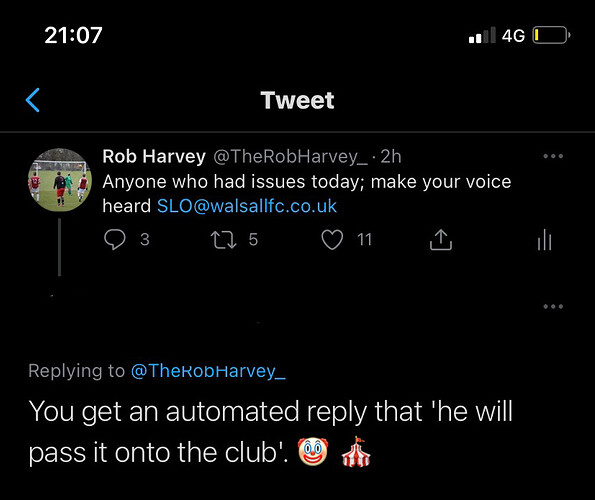 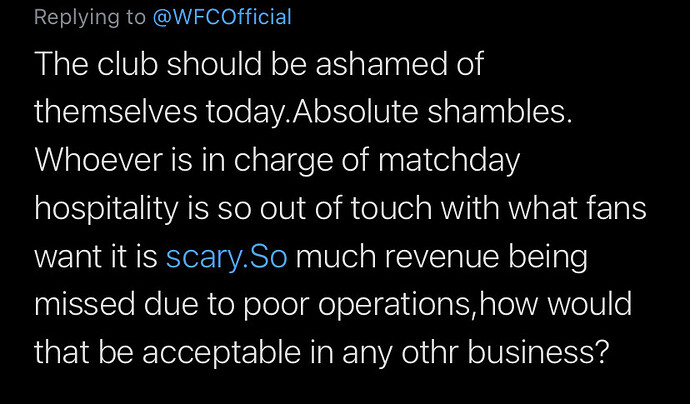 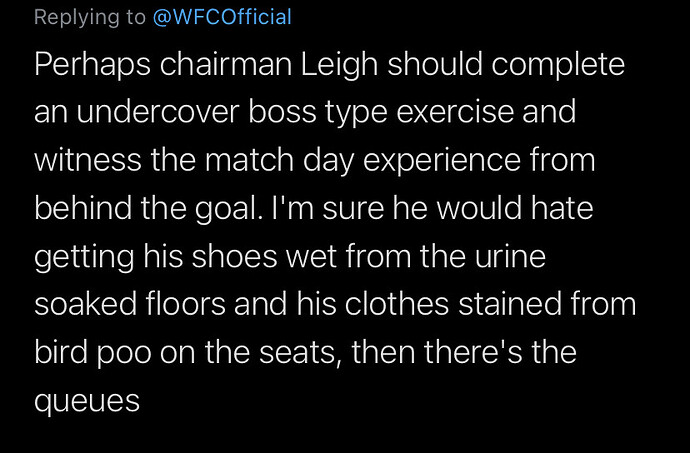 The old saying ‘The Customer is Always Right’ doesn’t seem to exist at WFC. The customer isn’t always right, but when so many people have so many issues, and many of them interlink and sit with each other, the customer cannot possibly be wrong.

In what other business where feedback is this bad, on a consistent basis, do heads not roll?

18 months away ladies and gentlemen, and nothing has been improved in terms of the fan experience.

No tannoy system in the upper tier either.

Couldn’t even make out any of the substitutions for both sides or any announcements being made.

Could really make it out in the lower either.

LP wants to have 5,000 ST holders or whatever the target was he mentioned at some point, we can’t even deal with a crowd of 4,000 in totals and from the outside it looks like nobody could care less.

I also appreciate that the people in the ticket office are busy, but I sent them an email regarding Google pay not working to download my season ticket and if it wasn’t for the good people on this site with a workaround for it, I wouldn’t have had a clue on how to get it to work.

I emailed them 16 days ago and haven’t received any sort of reply. 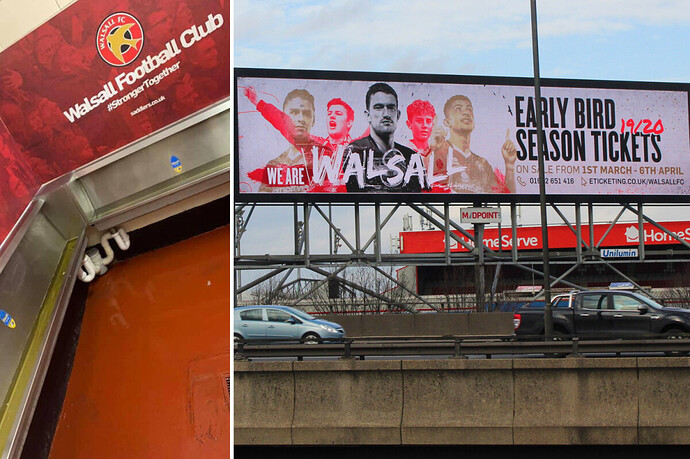 Floods of urine and years in third tier, are Walsall one of most boring clubs?

ARE Walsall one of Britain’s most boring clubs? The Saddlers have spent a staggering SEVENTY-FIVE of their 99 EFL seasons in the third tier. They rarely go up or down. No other League One team has …

Not even the fact we made the National news (not the greatest outlet) seemed to matter. Swimming through piss then, swimming through piss now. A division below where we were at publication, and with a new leadership team. Hopefully it’s new piss and not the old stuff.

I believed in Pomlett. I believed he was as breath of fresh air and a new era was beginning.

I now fear we’ve been duped again. It’s a case of “let’s see how many fans we can fool into believing its a new era before they realise we’ve done the grand total of nothing to improve things”.

I emailed them 16 days ago and haven’t received any sort of reply.

Use the customer charter at your leisure.

I wasn’t there today so can’t make direct comment on how things were this afternoon, however, when I went on Tuesday night the queues for food were massive given the size of the crowd because of the time it was taking to get served. Surely, a good indicator of the likely scenario for today.
The issues around serving times were apparent before the long lay-off. Granted, if there were plans to physically expand the food-serving areas and this not being done in 18 months would be disgraceful but I thought that option had been discounted. The alternative solutions should not require such a long time to put in place and should have been in place today.
The sheer simple fact that there was not enough food or beer to serve a crowd that was bang-average for a home game is startling.

Spot on Rob, just too add we are sponsored by a brewery that’s what makes it worse about running out of beer.

Don’t go getting banned Rob, the club won’t like this.

In the Upper only one of the kiosks was open.
So that would have also contributed to the other kiosk selling out even quicker.

Rob is allowed to liaise with the club directly = Buys into what’s being said by management/leadership, eats his biscuits, and defends them to the hilt.

Rob is barred from liaising with the club directly = Apparently many of us are “now waking up to the apparent realisation that the club don’t care”, and launches a diatribe against the club.

Rob - most of us realised that “the club don’t care” about 14 years ago, and certainly within the last 10!

Do not feel you are suddenly some sort of rabble-rouser against the establishment you used to kowtow to very recently.

That’s bent me up. People are right goading each other.

Agree mate, but we both know they are a bunch of shit houses.

Rob is allowed to liaise with the club directly = Buys into what’s being said by management/leadership, eats his biscuits, and defends them to the hilt.

You’ll find that I’ve never bought into what’s been said, and I’ve not ever defended the indefensible. Give chances where they’re deserved, and call them out where it’s deserved also.

For the record, no biscuits ever changed hands between me and WFC.

I’m sure there’s also people that could testify I’ve never been one to tow the line where the club are concerned.

I’ll also add (if you’ll allow me to of course) that I would bring this up at WPM’s but of course I don’t have that honour now, so I’ll just have to do it here.

Further to that, you’ll also find that after Bristol Rovers on Boxing Day a few years back, I called them out here also.

Well spoken Rob.
This whole thread should be copy and pasted and sent to Gamble, Mole and Pomlett.
It’s simply a disgrace to the fans and paying customers.

What we going to do about it then