I recognise that Darryl Clarke is doing well at Port Vale and he also found success at Bristol Rovers. However, he has gone on record as being quite dismissive of managers that talk about having a ‘clear identity’.

Again, I know that League Two is a war of attrition at times and Newport have always done well playing a rather direct style of football.

However, Matt Taylor always talks about identity and trying to play the right way. In a game where we could easily have lost, I found the stats attached really interesting.

The corner stats stand out but given that we were the home team, that is less of a surprise. The pass stats though, show that we are surely moving in the right direction.

I think we are gathering a decent momentum and if we can reach the play-offs, I think we have a fighting chance, with players like Monthe, Labadie and Khan all having recent experience there. 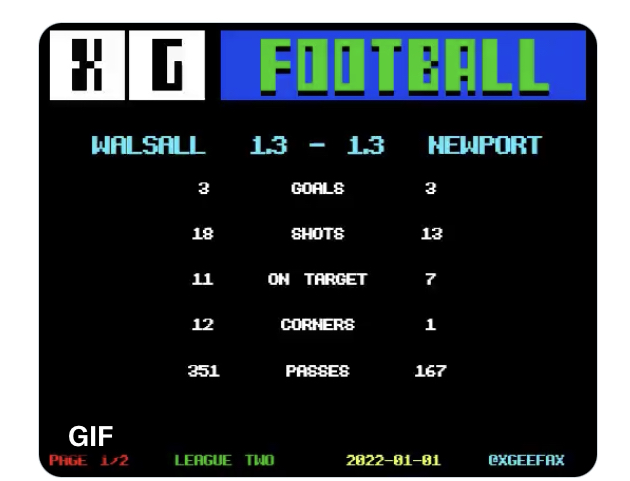 I posted yesterday that the light at the end of the tunnel is getting a little lighter. Those stats.tend to support that view. We have a long way to go though but I think we are moving in the right direction.

Surprised by those passing stats tbh. How many of those passes were backwards though. I do get frustrated at times when a player receives the ball with acres of space in front of them and instead of driving the team forward taking a few risks takes the easy option all to often.

There are a couple of ways of interpreting that.

For me, it is positive in that the attacking part of the team now has options. To be able to bring Wilkinson and Shade off the bench is a boon. With Kiernan still to come - at last we have a few really positive options. A backup for Miller would be good though,but maybe that should be Phillips who still looks a bit lost wide.

The midfield 4, 8 and 10 is also beginning to make more sense. With Holden still to come we will enhance those options too. The stats support this.

So the area we really need to focus on is the back four. All at sea doesn’t come close. The bedrocks of all of our promotions in my lifetime has been a solid and cohesive back five (including the keeper). Currently we look neither solid nor cohesive.

That’s good news because we’re in a window and so have an opportunity to do something about it.

Constantly needing to chase for a goal doesn’t help, we simply can’t defend a counter attack.

… Twice. Can coach all you want but that back four needs to take some responsibility.

Yes. Their third. For them to be having a kick off and then within 20 seconds have overlapped our left back and then outnumbered us in our own box is really poor.

But overall I do think we are getting closer.

Yep we are getting there.

The frustrating thing for me is we are 2/3 players from having a real good go.

A centre forward
Holden
Left back.

If I was being greedy, another number 8…

Close but so far.

A significant departure from the past two seasons is that we’re trying to play to the strengths of our players and the team as a whole, which allows for a style of play, hopefully an attractive one, to develop.

Always felt under Clarke there was a huge focus on nullifying the opposition and taking advantage of their weaknesses, which meant modifying our approach on a game-to-game basis.

That led to the inconsistentcy in selection and formation that didn’t allow much in the way of familiarity or rhythm for the players, nor the infamous ‘gel’. Made us very one dimensional when chasing a game and might explain why we drew so many.

Obviously we’re a long way from being top seven side, and defending is an issue, but there are good signs under Taylor that we can recruit and build a team around a consistent structure where players understand their jobs.

Worry with Taylor is that he seems devoted to 4-5-1 and can be a bit predictable with subs, whether that changes when he has better/different players at his disposal (such as another centre forward) remains to be seen, and puts greater expectation on Fullarton.

I agree with that, it really annoys me.

because we’re in a window and so have an opportunity to do something about it.

Regrettably in the excitement of such opportunities we tend to forget that this is Walsall, we are crud at transfer windows, always have been, and still are. Basically because we do not, or will not, spend money on transfers…it might put the bosses rent at risk.
As one of our top class poster’s puts it “we will sign some no mark reserve, on loan, at 8.56 on January 31st.”
Further enhanced by Taylor’s insistence that the squad we already have is good enough.