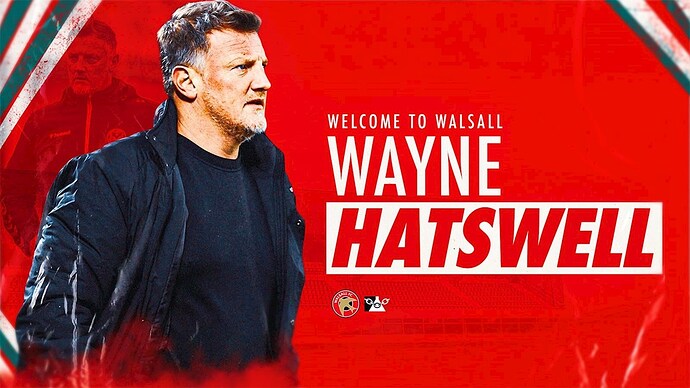 Walsall Football Club are pleased to confirm the appointment of Wayne Hatswell as Assistant Head Coach.

Wonder if Matt Sadler is being kept on

Wow I had to rub my eyes then….is this my football club actually moving in the right direction??.Really hope these two can replicate what they did at Newport better days are ahead people bring it on.

It’s good that the club have facilitated this appointment, which will hopefully bring success.

I remember him as a player, although he had a journeyman career, but I don’t remember Michael Flynn (I do remember the other one, who played for Stockport for years) although that isn’t really relevant, I just thought I’d mention it.

No reason why not. It’s Macdonald he’s replacing.

How come on the club’s twitter feed this was only posted 1 hour ago, but on the OS it’s marked as being 5 hours ago (even though it appeared later than on Twitter)? Was it all ready to go but there was some last minute hitch that delayed it?

Well done to the chairman for getting on paper at least , two good men in to steady the ship and hopefully steer us away from relegation.
Then the job will start again by supporting them with rhe players they want to bring in .

It’s an interesting appointment. They appear to be a team, who go places together. Does that risk the scenario which Pomlett said he wanted to avoid, whereby a manager leaving (and his assistant) rips up everything that has been achieved? Of course, it was the appointment and continuity of Fullarton that was said to negate that, and it certainly felt that way with Taylor as manager, but it feels a little bit more threatened by such a strong and previously successful management team.

I could be talking out of my arse - it’s not unheard of - but perhaps a concession Fullarton has had to make after accepting some responsibility for the season thus far has been, appropriately, an order from Pomlett to ‘back off’.

If the new world order is the philosophy of Flynn/Hatswell, where does Fullarton fit in?

I’ve no idea whether that is a factor. I’d have more thought that Fullarton’s place is to set a footballing direction for the club and oversee all elements of it, from schoolboy to senior football. We have to give him credit here - he was supposedly looking for a new manager the morning after Taylor left and so it would seem that it was him that found Flynn and, indeed, Flynn spoke of his high regard for Fullarton as being one of the reasons he came here.

I think a DoF still very much has a place. If nothing else, it allows the coach to focus on the day to day, getting the team prepared for each match, rather than all of the stuff that goes on around that but which does not directly, in the short term, affect that.

Yep, good points. Fullarton himself went and got Flynn so maybe he wouldn’t be the proverbial turkey voting for Christmas, and looking at it another way it’s a bit of a challenge to himself to hire someone with more experience and directness. I remember posting a couple of weeks ago, albeit when we were all in a cynical rut, that the board would prefer a ‘junior’ and/or ‘yes man’.

Ultimately as nice as it is to gossip and speculate on these matters, a great many picking and choosing their games will be swayed on one thing - whether it all works. So far so good!

I don’t know anything about Fullarton as a person but I will say this from my own experience in my career - if you’re happy and stable in your own position, you go and pick the very best people to work for you, people with more knowledge than you, people who compliment your knowledge, people who can get things done. You can only benefit from and take the credit for the good that follows. Maybe that’s where Fullarton is?

Welcome, Wayne. We all hope you and MF are as successful here as you were at Newport.

All the best Wayne, hopefully good times are again ahead!