Wes McDonald in League One

Signs for Morecambe on a two year deal. 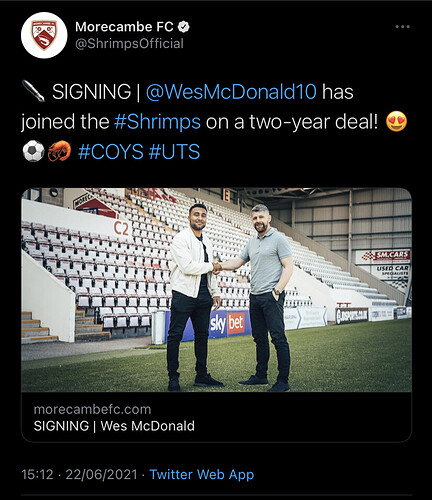 Will be found out way to often at that level. His inconsistency and desire is his downfall

One trick pony who doesn’t really help the cart move

I wonder if he did any stepovers when signing his contract?

Good luck to him. He obviously has talent and perhaps with a sensible Manager and a playing system that makes sense, he can realise his potential. Or perhaps what we have seen is the best he is capable of.
It will be interesting to see how some of the Badgeman players do at new clubs.

I wish him well. Simply not consistent enough to do a job for us. If he can become more consistent he might do well.

Gave us a few memorable moments but far too inconsistent. Too many times he got lost in a game and might as well not been on the pitch. Hope he finds the correct attitude and desire as he does have a talent in there somewhere.

Couldn’t cut it in league two let alone league one,I tell you what though his and scarrs agents must have a way with words to get those deals through.

Good luck to him.

Clarke and Dutton didn’t help him one bit with the tactics they used. There’s a player in there just needs to receive the ball in the right areas of the pitch to effect the game. Deep Left wing and defending wasn’t the areas.

Ooof I was a fan of his and even I think that’s a terrible signing for Morecambe.

Consistently inconsistent/crap. Great talent there and delivered some fantastic goals for us, when he’s bothered and yes he may do better under someone other than those mugs he had in charge of him. Still think this is a poor signing. Imagine being in a four team relegation dogfight and signing Wes McDonald. Another one who’ll get found out what his real level is I reckon.

Wish him and Morcambe well but. . .

Far too inconsistent, great on his day but unfortunately thats only 10 days a season.

League 1 defenders will suss him out.

Good luck to him… I will always remember him for the Crawley goal at the Bezza. League 1 not so sure but doesn’t surprise me it’s with Morecambe.

Good luck to him, we saw glimpses of what he could do, you never know with a better manager it might work out for him.

They must be desperate. Any club that can’t see past those step overs and nut megs is going to have a terrible year of recruitment.

I think a few games he looked like he could really of made a difference for us .

He became too predictable and was a one trick pony , but his biggest downfall is he’s far too idle and would never make a challenge or help out when you had to roll your sleeves up and get stuck in .

One player I was glad to see released in the end , which was a shame really as if he put the effort in could of been useful .

It makes sense for Morecambe. At least 1 level they’ll have lowest budget by miles so really all about finding players more who can do a job at league two level as will take a miracle for them to stay up especially with Adams leaving.