Agreed. He is part of a dim distant past when we were owned by a failed bog brush seller. We need to look ahead not back

✍️ Anyone fancy a signing? This one is right on 𝙎𝙤𝙣𝙜... pic.twitter.com/0hMRn3PQe9

Suppose he also touted as a midfielder.

With these signings money is def there for DJ, just refusing to be held of a barrel for him.

Loan until end of season. Seems like a decent signing

Another one announced later today?

Feels good Walsall being referred to as a promotion rival. 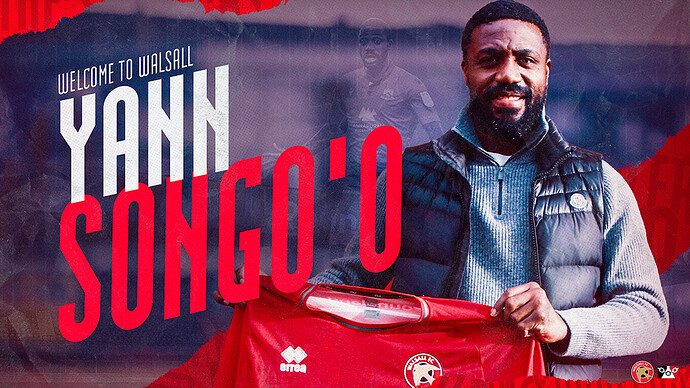 Walsall Football Club are delighted to announce the signing of midfielder Yann Songo’o from Bradford City on a loan deal until the end of the season.

Songo’o is eagerly anticipating his new adventure at the Poundland Bescot Stadium and is proud to join the Saddlers.

“It is a massive club first and foremost,” he said.

Head Coach Michael Flynn is pleased to bolster his squad with the addition of Songo’o.

“He brings a wealth of experience in midfield and he’s won promotions out of this league.

Midfield replacement for Earing rather than defensive cover?

Think he’s played more as a centre half this season, which I’m very happy with because we are finally fully stocked at the back. Lovely stuff.

We’re going to be horrible to play against

look how much muscle we’ve got! Tins of corned beef all over the pitch.