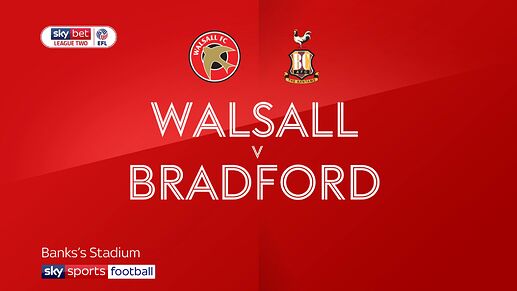 A rearranged game on Tuesday after the original date of Wed 29th December was cancelled due to Covid in the Bradford City camp.

The Bantams head into this game 12th in League Two with 33 points from 25 games, only 3 points ahead of The Saddlers but with more realistic aims of hitting the play-offs.

The visitors are managed by Derek Adams, who joined them in pre-season, opting against leading the Morecambe team he got promoted into League One last season in favour of trying to get Bradford there this season. So far, it’s not gone to plan, but you wouldn’t bet against them sneaking into the playoffs come the end of the campaign. 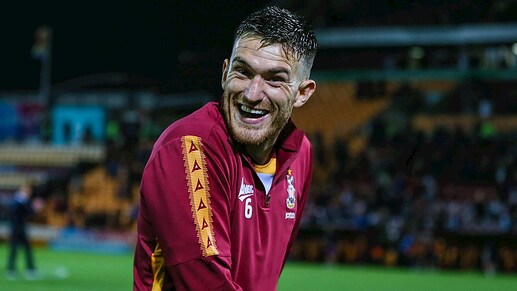 Spearheaded by none other than ex-Saddler Andy Cook, Bradford will head to the Black Country with more than a hope of getting a win, aided of course by our poor form and lack of playing staff, especially in defence. Caolan Lavery also plays for the visitors, and even he might stand a chance of scoring if he gets on in this one.

January has seen The Bantams secure three signings - Matthew Daly (on loan from Huddersfield Town), Jamie Walker (on loan from Scottish Premiership side Hearts), and Dion Pereira (on loan from Luton Town, formerly of MLS side Atlanta United), all with the aim of pushing on in the second half of this campaign.

The last six games that Bradford have played have thrown up a mix of results, and are as follows:

Now onto The Saddlers…

Matt Taylor and his side head into this game winless in FOUR GAMES (D1, L3) and with a crisis on their hands. 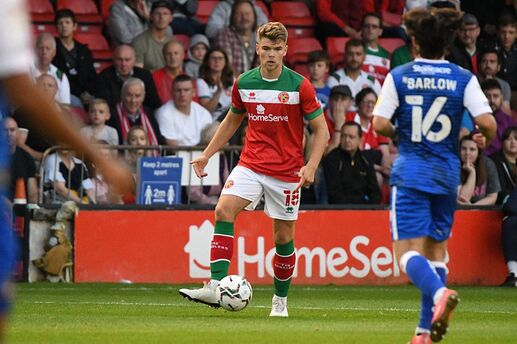 We head into this game having seen Ash Taylor AND Otis Khan leave the club with a mysterious illness that seems to clear up pretty quickly once out of town, and we are also without Stephen Ward (injury) and Rollin Menayese (suspension) so at the point of writing we have only Tom Leak to deal with Mr Cook, with any other CB either coming in on loan or being shoe-horned in there such as Hayden White. We are also no closer to seeing Rory Holden appear in a Saddlers shirt, it appears, following his long injury layoff.

On top of this, fans are slowly starting to turn against those in charge at the club due to the way they have handled themselves both recently in terms of the ‘mysterious minutes’ that are yet to be seen because the club have wet their knickers about them, and more long term now that stats are coming out about team performance over a number of years, even as recently as just dropping into League Two.

Since dropping into League Two our league record is as follows:

Since dropping out of The Championship in 2003/4, our league record reads:

Only In 4 seasons out of 17 seasons have we improved on our previous season’s league position. 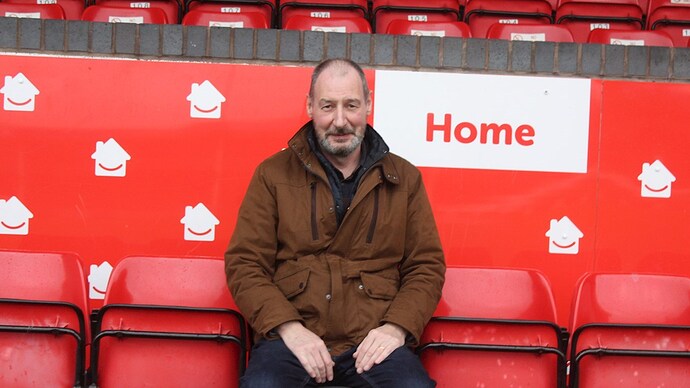 Anyway, back to Tuesday - how many of you that have ST’s are not going to bother this time? I’m again not going, and can’t see anything that suggests anything other than a heavy defeat, with Andy Cook scoring a few.

Anyone fancy a guess at the team selection at this point?

Good luck to anyone going, enjoy the (ninety) minutes

- There’s nothing to be positive about for me, sorry.

I really shouldn’t bother but I’m an idiot when it comes to Walsall. So I will no doubt be there in the hope of a miracle.

If we don’t bring in any players it is really difficult to see anything but another defeat.

I’m going with Everton Andy so that’s +1 on our usual audience.

I won’t be going unless we make 3 good signings before the match which is very unlikely .
Good job Bradford will bring 500+ else the attendance could have been embarrassing.

3-0 loss Cook(2) and Lavery with the goals it will get worse before it gets better.

I’m back on Plague Island so will be in attendance with my lad and my big coot.

I won’t be there. I’d rather do my food shop.

Cook’s been on the bench recently - has he been injured? Lavery appears to be right out of favour, hardly been seen at all.

If I was Bradford manager I’d start them both against us, the law of the ex means they’re guaranteed to score!

Cook’s been on the bench recently - has he been injured?

I believe so, came back start of Jan, scored last Barrow.

It’s going to be ugly without our starting centre backs in the team.
We were a thin squad before Saturday’s game, with suspensions and Ward’s injury the situation at the back has compounded things.
LP was saying the other day about the relationships we have formed with other clubs, it’s time to call in those favours.
I don’t see anything other than a Bradford victory with our current squad.

I think we will lose this, 0-2 is my prediction.

Cook’s been on the bench recently - has he been injured

Greggs was shuting and he pulled his hamstring rushing

Really can’t see us getting anything, despite having the “it’d be typical Walsall” thought that we might win.

Still plus ten and the next point could be from the gd. Of course it’s about the relegation zone. So nothing to worry about, right.
This game? After a few bad results it’s time for something better, but draw is the max of it. But maybe I’m wrong and will be surprised at the end.

Even though I can only see us getting absolutely dicked on Tuesday, I will be going to give that spineless bunch of directors some stick if nothing else!!! I do fear what the final score might be, and what lasting damage it could do to the team so clearly devoid of confidence and belief!!!

I’m going even though 4.0 bradford

It’s time like this the team needs us as supporters to get right behind them and give them the ‘support’ they need.

I shan’t be going on Tuesday, I have some paint drying which needs watching. It’s nailed on to be more satisfying than watching the pile of

that passes for Walsall FC.