yes can i 2nd that

Shows how ■■■■ poor and unpredictable League Two has been given that I’m sure in previous years it’s taken scores of 90+ and 100+ to win and certainly not by this big a margin, fair play @Exile the only one who’s been able to make sense of the madness.

Here are the updated and FINAL tables for this season’s Prediction League.

The winning score from the weekend was 4 points, achieved by DonningtonSaddler and Cookyskid - well done to both of you!

Exile had already won after last week, but a nice 3 pointer, cemented his decent lead in top spot, which had been his for quite a long time - a worthy champion this season! 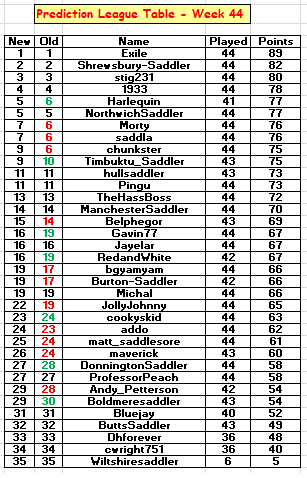 As for the points per game week, Exile came out on top of that one too, unsurprisingly, but a few predictors, who hadn’t played all 44 game weeks saw their position improve here. 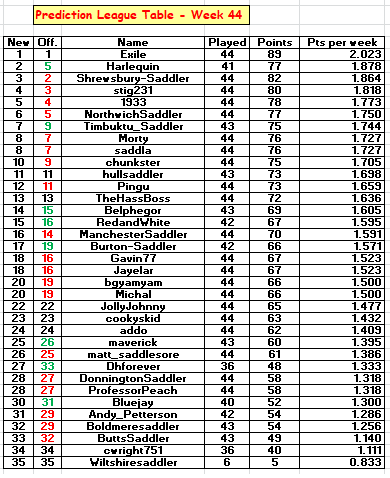 Finally, in the weekly wins race, Saturday’s win for Cookyskid saw a 4 way tie for the top spot, all with 4 wins. Although WillenhallWFC stopped predicting a dozen or so weeks ago, he was the only one who had a full 6 pointer, and from the other 3, Morty was the next best with a 5 pointer weekly win. Well done to you all. 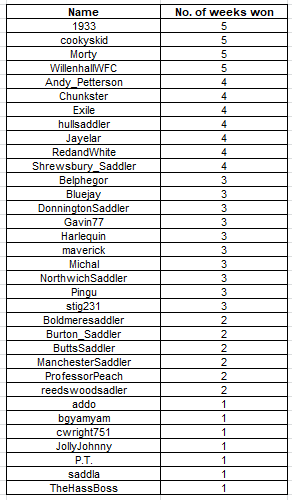 That’s it for now, there is no big video announcement to be made on the future of the prediction league and we can all hang up our predicting boots for a few months at least!
Well done to all of you who stuck it out and enjoyed the ups and downs of this crazy league two season we have had! Now, go and enjoy doing something else until August!!
See you then!