This was the point I was trying to make with my first post.

However, posters should know he will always want the last word.

I let him have the last word otherwise it’ll never stop.

If he irritates you then starve him of the oxygen of replying.

I think most of us try do this then eventually bite when you see he’s changed topic once again and taken over a thread.

This is not my intention as I know he’ll always have the last word. I don’t mind his input when he stays on topic but we all know he’s on here looking for an argument and then plays the victim.

The problem is that he loves all the attention, he thrives on it and most give it him. I bet he felt so special and warm inside when he discovered a thread dedicated to him.

That’s me done, this thread is truly busted, like so many other threads he has input on. I’m not going to block him but my interaction with him stops now. Hopefully we can all do the same.

I can feel a last word coming.

The standard response of anybody who doesn’t actually read my contributions. I pointed out that it was completely unnecessary.

People talk about me being a contrarian. My point (to actually keep this on topic) is that it’s been a bad start, Clarke didn’t get his men after going big in the press (something that other managers have been crucified for) and that it’s too early to say his squad building has failed but he himself has acknowledged he failed to push through the other attacking signing we need.

If that’s contrarian then you all need a dose of reality. But I’m sure it will be more peaceful if the people that can’t handle that just block me

My point (to actually keep this on topic) is that it’s been a bad start, Clarke didn’t get his men after going big in the press (something that other managers have been crucified for) and that it’s too early to say his squad building has failed but he himself has acknowledged he failed to push through the other attacking signing we need.

Can’t argue with the facts. The only thing I would disagree with is the comment about previous managers.
Keates had a decent honeymoon period, partly due to his club legend status and partly due to a very good start. Smith had his detractors from day one, more to do with being the cheap option, but quickly gained the respect of the majority of fans through results and style of play. Saying that, some were never convinced.
Whitney had a short honeymoon period, mainly due to him not quite getting us over the line, together with his management style / media skills. He was cut no slack at all when we made a poor start to the following season, despite losing the key players that almost got us promoted. He was the exception rather than the rule when it came to getting crucified so early on in his tenure.
Saying that, I reckon it won’t take long for DC to come under pressure if results don’t improve, particularly as we are now playing in a league lower.

This is a Gaffney thread. Get it back on topic or get suspended.

Can I be suspended please ?
I am growing tiresome of these threads going off topic.

PM me and tell me how long you want.

Is that Dean Gafney ?
If so I hope he brings Wellard with him.

Every thread, one common denominator

I can feel a last word coming. 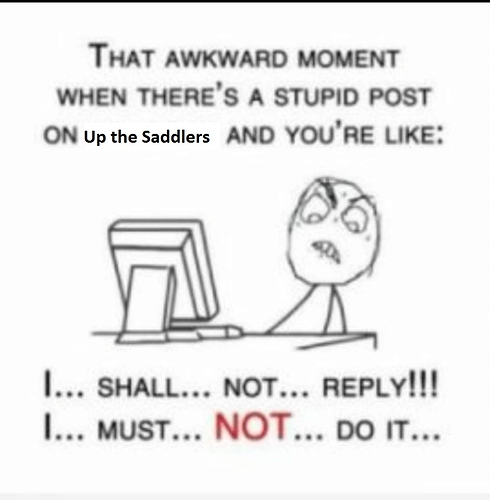 Doing Ok - putting himself about but mostly outside their box.

This in absolute bucket loads.

Serious boys, let it ■■■■■■■ drop its boring now, If you dont like what el nombre posts then dont reply simple!

Is “feint” a joke or your predictive text, Belph? If it’s a joke, it’s a very good joke about a tricky winger, albeit a bit subtle.

Must admit I was surprised to see him involved tonight.

Being ineligible on Saturday delayed things but I just assumed it would be a case for DC coming out after the game or on Monday morning and saying stuff like “Gaffs was great for me at Brizzle but it simply hasn’t worked out for him here with the fans not taking a liking. After discussions we’ve decided it’s in the interests of all parties for him to go back to Salford and have a fresh start elsewhere”

I assume all season long loans have break clauses in them (mainly due to injuries) and we see many cases of players being recalled in January like George Evans.

If he can’t be recalled maybe shows the folly of waiting until right to the end of the window. DC goes after obvious player, Salford sense the desperation and knowing they weren’t any targets at the 11th hour played hardball and made sure they got him out for the season.

I’m not trying to create negativity when the team is starting to pick up now but ultimately him remaining at the club and not scoring is basically blocking an attempt to get in a fresh face upfront this month which is still needed with the team still struggling to score more than one goal in home games.

Think it’s pretty obvious six months on it’s not going to happen for him here in the way it has for McDonald and some of the fans aren’t willing him on to prove them wrong. We’ll see what happens in next few weeks.

Disappointed for him tonight, it hasn’t happened for him, a few weeks ago I believed it would turn but the negativity and his poor form doesnt seem to be changing. This guy was one of the mainstays in Bristol Rovers promotion to league 1 a few years ago, I agree maybe a fresh start would be good for him.

Definitely seems he’s completely lost his way and will do very well to recover it here. As others have said, fresh start needed.