Had the following letter from the chairman In the post today

As you can all see no. Further working party meetings will take place. And they are being stopped with immediate affect

, the. Communication with fanbase. By the club will be as. Detailed in the contents of the letter moving forwards

Thank you to all on here and other. Sites. Who took time out to. Send me. The questions they. Wanted raising

As you can see. The chairman has not. Indicated. That any fan queries be directed. To club or slo By any other means. , so. I take it. That. The. Three. Diarised. Fan forums. Are. Now. The only platform available. For the wider fanbase to communicate with the club
, unless he plans on doing. A video. Advising. Fans. How to communicate. And with whom. In the Time between said forums

If we get any further communication. Issa will relay it to you guys as and when or indeed if we receive it 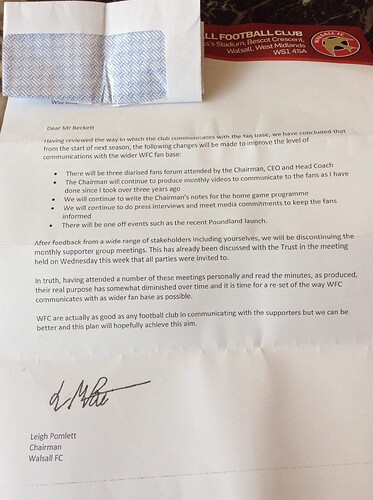 That last line just shows the echo chamber they operate within.

That last sentence is hilarious

They are retreating to The Bunker if you ask me. Matches their mentality, heads in the sand!

Well if THEY say they are then they must be

Backward step and not a good look. Appears to shout “we don’t like to be held to account by these pesky supporters groups”.

Backward step and not a good look.

So in a letter which says how good we are at communication, we make an easily avoidable mistake.

“The Chairman will continue to refer to himself in both the third and first person as I have done since I started writing this letter.”

I don’t know/understand the reasoning behind what the club is doing but the letter sent is poor in my opinion, no thanking anyone for giving up their time in attending the meetings etc and the tone of the letter is not good, there is no regards and yours sincerely either at the end.

Strange things going on at the moment again

Straight out of the Roy Whalley book of communication.

I expected this to be honest, wankers

And can’t trust himself not to do it again

The wpms were no doubt fine when they only had doormats to deal with I’d imagine. Nothing to see here obviously

Well we know why none of the board bothered turning up the last one then.

I’ve emailed the SLO repeatedly in the last 3 months for a fans focus meeting to be organised…. And absolutely Jack shit.

What a terribly written letter and an equally terrible decision.

They basically want to be able to spout their official line with as little opportunity for fans to question or challenge those announcements as possible.

Another sad day at the Pyongyang Stadium.

Not a shock, feels WPMs have been steadily wound down since ‘minute-gate’.

Would love for the club to consult supporters when making these decisions, though. How many fans have been asked whether we feel the meetings were worthwhile? If the information shared in the minutes was useful to us? If there were any better ways for us to be informed & represented?

All the fan groups get is a bullet-point list of things the club already do or are supposed to do and a passive aggressive sign off about how good they judge themselves to be (based on little or no external feedback).

If these changes are made to improve links between the club and fanbase (be it the SLO on the Board, membership scheme, or improved communication) why are we never actually asked what we think?